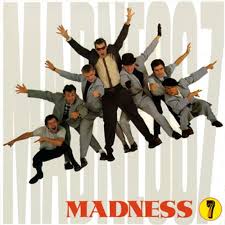 Defining the style of madness is very difficult; in fact the band is mixing a lot of different genres like ska, reggae, pop, new vawe.

Their name, in fact, comes from a very famous ska artist Prince Buster and “Madness” is the title of one of his songs.

Madness are originary from Camden Town near London and have been created in 1976.

Like most part of the bands, even Madness went trough a moment of hiatus, it happened from 1986 till 1992.