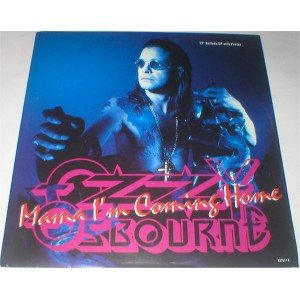 Ozzy announced his retirement from the music scene! Luckily it was only for few years, the Godfather of Metal released a new album back in 1995, four year after one of his best success as singer (outside the Black Sabbath), the album “No More Tears”.

No More Tears sold over 7.000.000 copies to date and in its lyrics production have seen the contribution of two big protagonist of the Heavy Metal music scene: Lemmy from Motorhead and Zakk Wylde, guitarist of Black Label Society and longtime friend of Ozzy.

But who is “mama”? Mama is the nickname of the wife and manager of Ozzy: Sharon……definitively we can say that she has been more than a wife for him, especially in the years of drug and alchool abuse of the singer.

The album was the sixth of Ozzy as solo player, while his career started in 1980 with Blizzard of OZZ.

Ozzy promised Sharon to retire from the music scene in order to dedicate more time to her and to the family, it is in those years, between 1991 and 1995 that Ozzy, his older son and Sharon created the Heavy Metal music festival called : “Ozz Fest”…..

To all our Japan’s fans! Get ready, in may 2013, the OZZ FEST will come to you! Slash, Ozzy, Slipknot, Black Sabbath and many more are planned to perform!

Ozzy was ready to renounce to everything for Sharon, he is saying that in the song…..he didn’t care about the sunshine…. He just looked for her love that’s it.

A Metal love song indeed! Sharon was able to hypnotize Ozzy…… was she successful? We think yes, can you imagine? They are married now since more than 30 years!!