how do you usually write your song?

Lyrics usually come to me in the most random times and places.

When I feel inspired, I have to stop everything I’m doing and start writing. As for the musical side of things, it is a group process! One of us will come to practice with a riff of drum beat or melody and weave it in as the song grows.

which is the best verse you ever wrote?

That is a very hard question! I really can’t think of our entire discography and try to pick my absolute favorite.

If we’re talking mainly about the new album, there’s a line in ‘Boy Band’ that grew on me over time.

“Throw on some black clothes

Get a few tattoos

Songs written for you”.

That was kind of a jab at bands who have someone else write their songs for them.

and the one of your favorite song?

My favorite song we’ve ever written is tied with Daughter and Puncha Nazi!!

this summer you played at Warped… how did it go?

It is the most rewarding thing you can do as a band.

It works you to your absolute limit and you meet the most incredible people and play very exciting shows every day.

It is such a blessing and we are so glad to say we were on it this year!

tell us about your song called Puncha Nazi, also in light of what happened recently in Charlottesville… what is its most meaningful verse in your opinion?
That song is a ton of fun to play live and we’re very glad it’s on the album! We wrote it before the Charlottesville craziness even started. We wrote it when Trump got elected and all the Nazis started coming out of the dark because they weren’t afraid to hide anymore because of him.
The most meaningful line to me is “Stop calling it ‘Alt. Right'” in the chorus. The term alt. Right is just the censored word for Nazi. Don’t cover that up. If you Consider yourself a member of the alt. Right, call yourself a Nazi.
And stay away from our shows.

tell us more about your album “manic pixie dream girl” , are you happy of the success it obtained so far?

We are very happy about how far it’s spreading! It’s reaching so many new listeners and we couldn’t be more proud of how it turned out.

We truly love this album.

do you remember the day you wrote “rubi”?

I found the original Rubi lyrics (though it wasn’t called Rubi at the time), and read it to the girls.

They absolutely loved it. So I gave it a facelift, tweaked some things here and there. Now it’s an enormous sounding song about powerful women that have inspired me.

I wrote it a while ago while we were on another tour with Otep.

I woke up for a crazy nightmare I had where I drove my car off of a cliff because I was being chased by people who wanted to kidnap me.

It was actually pretty terrifying. The song throws you in a different direction with its boppy, light feeling. I threw in some lines about my long distant relationship, because I was dreaming about missing him a lot as well.

tell us your fufuture projects, you gonna be on tour and….

Our next tour is going to be with One-Eyed Doll in October! Then we’re off for the year and then we’re playing Shiprocked in January of 2018!!

While we have our down time, we’re most likely going to start writing the next album. We’re already very excited about it; we didn’t think we would have ideas for it this soon!!

how do you apply the DIY way of living in your songs?

We write our own songs. We don’t have other people write for us. We’re very proud of that! 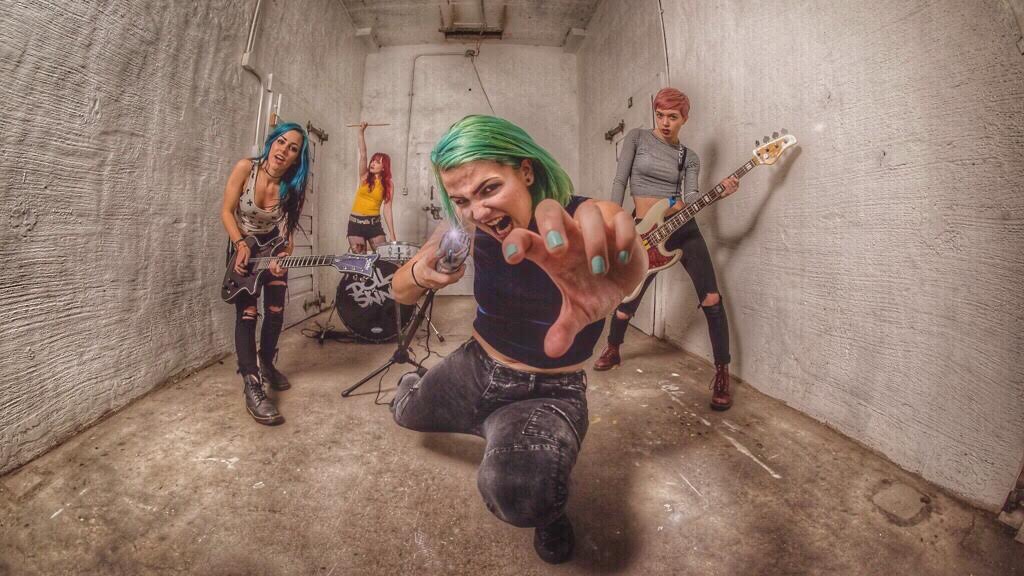