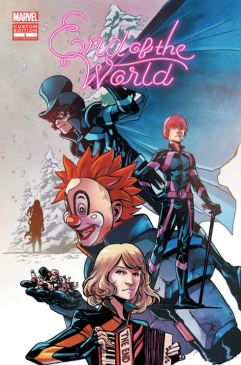 J-Pop megastars End of the World appeared at Comic Con Japan to announce their forthcoming collaboration with Marvel Comics to create a custom comic book. The comic will tell the story of the band’s incredible journey, with each of the four members turning a weakness into their very own superpower. The making of the comic will be turned into a seven-part documentary, to be streamed on YouTube Premium, with the first three episodes available to stream from December 11th with the final episode.

Always looking to merge their music with other art forms, this latest collaboration with the legendary Marvel Comics adds another string to End of the World’s impressive artistic bow. Their innovative, never say die spirit matches that of many of Marvel’s heroes and the comic’s story reflects this, beginning at the band’s origin at clubEARTH – the club/venue they built themselves in downtown Tokyo. The fascinating making-of documentary throughout December and January.

Starting off as childhood friends End of the World have come a long way since playing to crowds of ten in their self-built venue clubEARTH. Frontman Fukase brought the band together after experiencing a battle with mental illness and these struggles have informed their music, which isn’t afraid to tackle complicated themes or move in new sonic directions. This unrestrained attitude and a knack for writing hits has seen Nakajin (group leader, lead guitar, sound production), Fukase (lead vocals, group conceptualist), Saori (stage production, piano), and the masked clown DJ LOVE (sonic palette, comedic stage banter) conquer Japan, scoring nine top 10 singles in the Billboard Japan Hot 100, four of them no.1’s, and perform sold-out stadium tours, including two shows at the 140,000 seat Nissan Stadium.

Having supported Clean Bandit on their tour of the USA last year, playing headline shows at The Roxy in Los Angeles and The Bowery Ballroom in New York along the way, End of the World are ready to take their unique brand of music and live performance to the UK and beyond. The launch of this comic and series is yet another example of the band’s innovate artistic outlook.