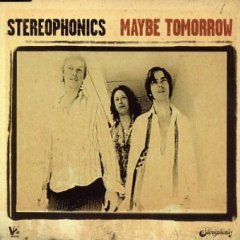 Last time we were on a concert of Stereophonics was in Dubai couple of months ago, we were impressed how many Welsh flags we found.

Judging on the look and appearance of its members, we couldn’t say that the band is on tour since 21 years……….. the energy on the stage is amazing and the audience definitively feels it.

Members of the band are : Kelly Jones (singer and guitar), Adam Zindani (guitar), Richard Jones (bassist) and, at the keyboards, Tony Kirkham.

During their career they released seven studio albums, the last one dated 2009 with the title “Keep Calm and Carry On”.

A new album is planned to be in store by first quarter of 2013, the title is still not definitive yet, it might be called: “Graffiti on the Train”.

The name Stereophonics comes from a manufacturer of record players, the idea came from the previous drummer of the band Stuart Cable that died in 2010 due to pneumonic complications apparently due to the heavy drinking.

“Maybe Tomorrow” was released in 2003 as part of the album “ You gotta go there to come back” .

The song , written by Kelly Jones, is about hope that tomorrow the things will be better and that he will be able to find “home”, to find a secure place

The video starts showing how the lyrics have been written and , sequence by sequence, explains his willingness of being left alone by all the things/people that oppress him.

We can say that, since the video it is self – explanatory , is better, for this time only, you to have a look on it in order to understand better.