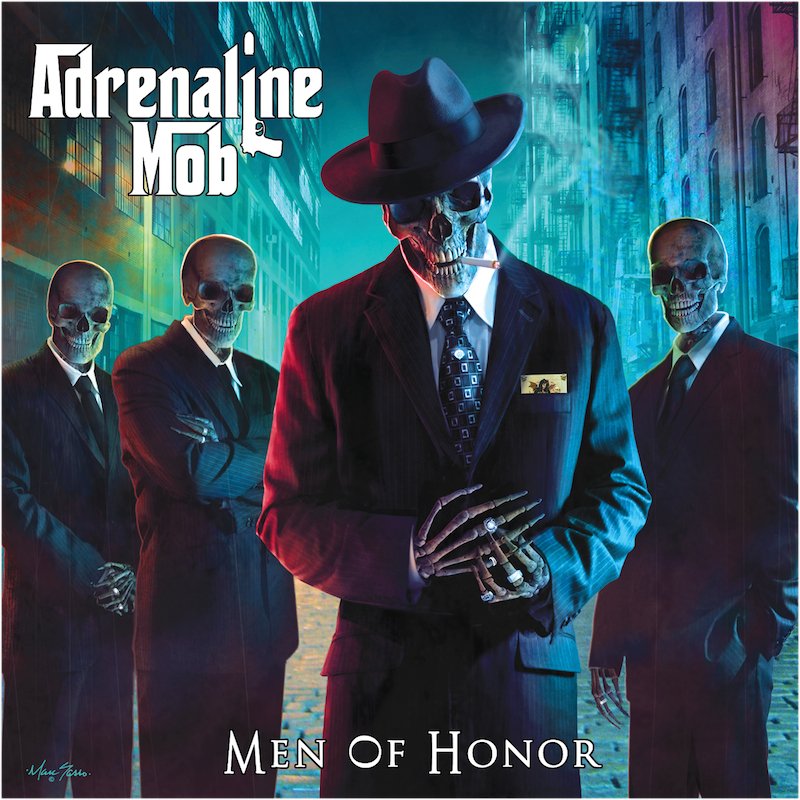 Mike Orlando, guitarist of Adrenaline Mob, answered to our questions on the their new upcoming album “Men of Honor” and lyrics.

Are you ready for it?

RYL: Your second LP “ Men Of Honor” is planned to be released in a month time, how are you preparing its launch?

Adrenaline Mob: We have been streaming the entire album 1 track a week for 11 weeks on our website www.adrenalinemob.com. On top of plenty of interviews that Myself & Russell have been doing we are also set to do a number of on air radio Acoustic performances.

We are also currently servicing our 1st single ‘Come On Get Up’ at radio. Plenty going on for setting up ‘Men Of Honor’ & more to come!

RYL: What inspired the lyrics of this album?

Adrenaline Mob: Myself & Russell write all the lyrics together & they can draw from a multitude of life’s experiences.

There are plenty of songs that I draw from things going on in my life like Crystal Clear, Behind The Eyes… Things Me & Russ have gone through like Dearly Departed, Men Of Honor, Let It Go, Judgment Day.

Mob Is Back is simply that..us speaking to our fans! Fallin’ To Pieces is very much related to Hurricane Sandy & the struggle I & Russ have seen 1st hand with people so close to us losing everything. It’s all drawn from real life & personal experiences.

RYL:  “Mob is Back” is the title of the first song of the album, Adrenaline Mob are back and ready to go in tour soon?

Adrenaline Mob: Indeed we are! We are back stronger & better then ever & can’t wait to hit the road with the new album & new lineup! AJ Pero is going to blow people away, he’s an absolute monster on the kit!

RYL: “Feel The Adrenaline” is our favorite song, how did you write its verses?

Adrenaline Mob: Thank you! One of mine as well.. For me I have spent years Drag Racing & still own my tricked out 700hp Corvette, so I’m definetely the Adrenaline Fueled Junkie of the band!

Russ loves the whole bad ass car theme as well and the song can be taken as talking about a smokin girl at times.

Music wise I wrote all the music at home in my Pre-Production studio & end up taking all the recorded Drums, Guitars & Bass with what ever vocal ideas & lyrics I have layed down & any basic scratch vox ideas to start. Then Russ & I sit & work out all the lyrics & vocal melodies together til it’s something we are both super psyched with.

Adrenaline Mob: I will usually start with a scratch vocal track with anything from scat melodies to sometimes almost complete visions of a song.

Then Me & Russ will sit there & talk out the idea of what needs to be spoken about. We pretty have full out conversations between us as if we were telling each other the story of what has happened. It’s real easy & we seem to always write very quickly together lyrically.

We won’t stop until we’re both happy with the lyrical content. It’s a blast.

RYL: The song “Come on Get Up” is referring to somebody in particular?

Adrenaline Mob: It has many references to many different situations that people can get themselves into.

RYL: Looking back to the time of your first album Omerta’,  let’s talk about “Indifferent”, what inspired you?

Adrenaline Mob: I wrote Indifferent purely on the aspect of looking back on my life & wondering if I made the right decisions along the way. I had many up’s & down’s along the way..

It’s a song about reflection, it’s a powerful thing & can sometimes consume you if you let it. But then the time comes when you exhale & you can say “I’m better now”.. I don’t need this or that in my life anymore.

RYL: What is the craziest thing a fan did for you?

Adrenaline Mob: Lol.. hhhmmm. I was on a Sonic Stomp Tour in China, over 2000 fans & most showed up for the signing afterwards which took hours to complete.. This one sweetheart of a girl was so shy, she kept getting back on the line instead of asking me to sign multiple items at once. So sweet.. but funny crazy!

RYL: Which is the verse of one of your songs that better represents you?

Adrenaline Mob: There are way to many because so many songs are drawn from my own personal life,lol.