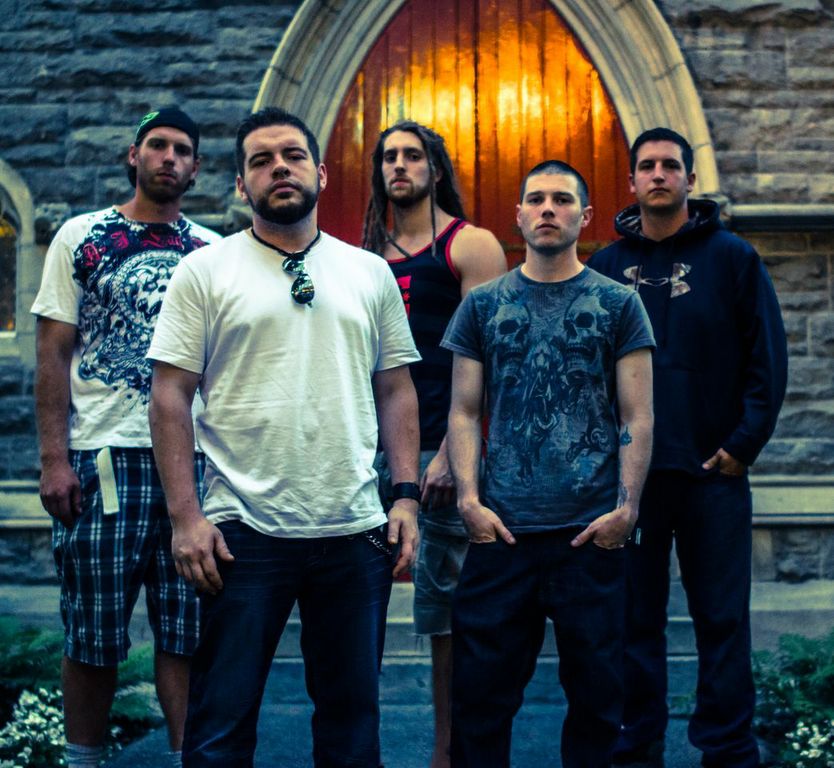 Tom Emmans is the singer of the metal band Deathpoint (https://www.facebook.com/deathpoint.metal)  that recently released their new album “Sinister”.

As you can see from the interview, the topics discussed were quite a lot and it represents an interesting journey in the world of Metal.

The band is currently touring, if they will be around your city do not forget to go and see them live!

RYL:   Tell us about your last album “Sinister” just released few weeks ago, how is it going? Which is the most frequent comment that you are receiving?

DEATHPOINT: The release of “Sinister” has been a very big step for this band. We have gotten very positive responses from fans and critics alike. This album was Deathpoint’s first chance to tour a little and show people what we’ve got. It is also my first album with the band which has been a really great experience so far.

People are commenting on the wall of sound style we use. Lots of layers with orchestra, sound scape type stuff and vocal harmonies. We try to mix brutality with melody and the feedback has been very encouraging.

RYL:   “Entitled to Nothing” is one of our favorite songs, how did you wrote it?

DEATH POINT: The riffs for “Entitled to Nothing” were written primarily by our bassist Brad.

The lyrics I wrote for it are about how some relationships can become dictatorships and there is a time when you need to know to walk away.

At the time I wrote this I was dealing with something like this and everyone was telling me I was wrong to move away from everything and start over with a new band in a new town.

This song was me documenting a time in my life when I ended a chapter I had been living all my life and finally turned the page. I left almost everyone I have ever known in that town and as much as I miss them, I have no intention of ever going back.

RYL:  What does it mean for you be a metal band?

DEATH POINT: Being in a metal band to me means that I work in a genre that represents a wide range of styles.

It’s a very exciting kind of music to sing because you can do anything vocally. It’s the only genre where screaming is not only accepted but expected in most cases.

Metal doesn’t shy away from technicality but encourages it and you’re free to try anything. You are free to do anything in any genre of music I guess but metal lends itself especially well to experimentation.

Metal also has the best and most loyal fans.

RYL:  What does the music industry misses nowadays?

The decline of record sales has affected artists in worse ways than the decrease in potential monitory gain. As record sales numbers continue to decline each year, so do the chances record labels are willing to take on developing talent.

There was a time not too long ago when a band, once discovered, would be signed to do as many as seven albums as a part of one deal.

These were relatively unknown bands signed because they were seen as having potential and may or may not have created a small buzz of their own. This was not done because they had built their own considerable fan base or established themselves as a platinum selling act. It was done to develop the artists and work towards those goals with them.

Now things are different. Many would say more difficult but I disagree. I would say it’s more competitive now because the tools are there for anyone to use. Labels expect you to do those early developmental records yourself but the technology is there. It used to be you need them to see you at the right place at the right time to even get a chance to make a record.

There are methods of self promotion that didn’t exist until now. New avenues are opening every day for artists to be entrepreneurs and finally be in control of their own careers. It is also important to remember that although people may not be buying your record, they are still listening to it, sharing it with new potential fans and going to the shows.

There is the live jamming things out approach and there is the “let’s all sit in front of a computer and record guitars” approach. Both have their pros and cons. Jamming things out is a great way to get to know the live feel of a song and instantly know whether it’ll translate well from the stereo to the stage.

The biggest problem with doing things this way is that there’s always someone with an instrument in their hands who keeps playing when we need to talk about the next part. The other approach is good because it’s easy to analyze parts and arrangements because they are recorded on the screen in front of you. Either way we always eventually jam it out before committing to it on record. In the industry’s current climate when record sales are at an all time low and the economy has concert attendance levels down, every performance has to be the best it can be so the songs had better work live.

Lyrically I always draw from what I know. Life experiences, philosophies that have hit close to home, my relationships with the people around me, my struggles with mental health and substance abuse as well as social issues have all found a place in my lyrics.

RYL:  Tell us what is behind the lyrics of “lost haven”….

DEATH POINT: The lyrics of “Lost Haven” were written about a failed suicide with a shotgun.

The original vocalist Jonnie Barr wrote them to tie into the album’s theme about mental health problems.

This was one of four songs he wrote before he parted ways with the band and I joined to finish writing the remaining five songs.

This song was originally on the “Suffer” EP the band released a couple years ago in preparation for this album. It was rerecorded for “Sinister” along with the other songs from “Suffer” and demonstrates Jonnie’s abilities as a lyricist with a talent for the macabre.

RYL:   You are promoting the album with several live shows, where you will go?

DEATH POINT: In support of “Sinister”, we have been playing dates around Ontario as well as Quebec, New Brunswick and Nova Scotia. We plan to continue focusing on Ontario and Quebec until the spring when we plan to go out west. There are also plans to go stateside in the works. We are also working on a new music video to help promote the album online.

RYL:  until today which was your biggest regret?

DEATH POINT: I honestly can’t think of anything I really regret doing in my music career. I took a very big chance in leaving my old band Odium, moving away from my home town and joining Deathpoint.

I guess I regret the friendships I lost in the process. That’s been the hardest thing I’ve dealt with as far as guilt or regret goes in my career so far. It was the right decision though so I don’t regret it. I just miss certain people sometimes and wish they were still here. I miss feeling like there is a place to call home and people I can talk to if I need them.

Then I realize I must have tripped and fallen into some feelings so I dust that shit off.

DEATH POINT: My dream is to play the biggest stages in the world opening for my heroes. To spread my music like a virus as far as it can reach. I want to expose as many people as possible to Deathpoint.

I want to travel the world, experiencing different cultures and meeting great people along the way. I want to know what it’s like to play in front of a crowd so big I can’t hear myself think. Oh and I want a million dollars. Hey, to told me to dream…

RYL:  think about (we know is quite difficult) your life without music, how would it have been?

DEATH POINT: It’s pretty hard to imagine my life without music. Music has been one of the only constants in my life. It is the one thing that has always been there for me and my music career is one of the only things in my life where I can feel confident and in control.

Having said that, there are many sacrifices that come with this lifestyle. I have often wondered what would have happened if I had stayed in school or at least kept one of the many decent jobs I’ve given up to be able to tour.

There is no question in my mind that I would be much more comfortable and financially secure without my music career. Comfortable and miserable.

RYL:  “for your eyes only” is another song taken from your last album, which secret it keeps?

DEATH POINT: The story behind “For Your Eyes Only” is that someone once wrote a very moving memoir about their childhood and gave it to me. They asked me to use it in a song.

They are a close friend of myself and the band. It was a powerful confession of shame and guilt at not being able to fix the past. It dealt with abandonment issues which stemmed from a very young age.

When asked when exactly all the events happened they answered; “When I was young….I don’t know what age I was. I guess… maybe I was five or six.” to which I added the lines “That’s when I got sick, sick, sick!” These became the opening lines for the song. The last part I added foreshadows the song “Sick Sick Sick” which comes later in the album and sets the tone for the album.

The person is now a competitive weightlifter and told me at the time that their motivation was to relieve their inner pain and to feel in control of something. To feel empowered. But it never made it better.

This song is the first song on the album and it is a portrait of denial, the first step towards recovery. One other thing, the memoir was sent to me with the subject line “For Your Eyes Only”.

RYL:  Which is the greatest metal band ever existed and why?

DEATH POINT: Choosing just one band in the sea of awesomeness that is metal music is just way too hard so I’m gonna leave you with 4 albums (in no specific order) that changed my life and made me want to do what I do. Tool- Lateralus, Slipknot- Self Titled, Mudvayne- LD- 50 and NIN- The Downward Spiral