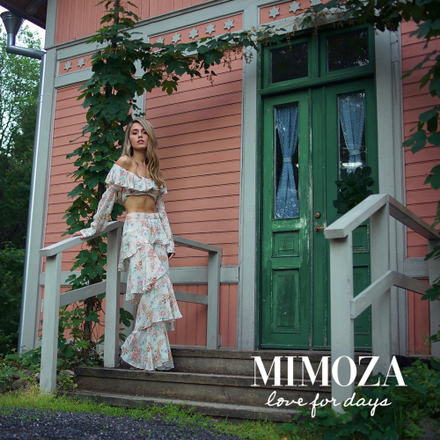 Entitled “Love For Days”, Mimoza’s new single features powerful vocals, punchy rhythms and strong cinematic soundscapes creating the ultimate pop anthem. It has been added to New Music Friday in over four countries including the US and Germany.

With a name as memorable and unique as her personality, Mimoza is a one-of-a-kind singer-songwriter who has seen her talents recognized throughout the world. Her debut release as a songwriter went to number 1 in Japan, selling more than 70,000 copies in one day. Her vocals helped “I Heart U” become the featured song of Smart Car Germany’s ad campaign and a hit radio single. She can also be heard on the soundtracks of successful German movies such as “3 Türken & 1 Baby” and is currently working on new music for the film “Fack ju Göhte 2”, alongside German hitmakers Beatzarre & Djorkaeff.

Mimoza’s fluency in four languages speaks to her diverse background. She was born in Kosovo, and fled at a young age with her family to Sweden, where she spent the greater part of her childhood. She later moved to Germany, where she lived for 11 years. She writes and sings in all of these languages and is focused on continuing her story of success in the US but this time, for her own artist project.

Producers such as Shea Taylor (Beyonce’s “Love On Top”), PJ Bianco (Demi Lovato, Jonas Brothers, Iyaz), DJ Frank E (BOB’s “Airplanes”, Wiz Khalifa’s “When I See You Again”) and more have recognized Mimoza’s undeniable spirit and talent as both a vocalist and songwriter. She is currently working in Los Angeles on her first EP.