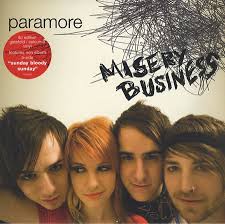 Riot! , is the title of the second album of the rock band Paramore, from Tennessee.

It has been released in 2007 and considered one of the most successful of the band, as the song “Misery Business” included in that album and written by Hayley Willams (lead singer) and Josh Farro (former guitarist of the band).

Hayley gave different versions about its lyrics…… the last one was saying that the song was about Heathrow Airport 🙂 🙂 (please somebody can tell us why?).

Reading the verses you will discover that the song is about a love story that ends leaving space to a new one; one of the two girls always wanted the boy and now she is happy that he left his previous  girlfriend and he is now with her.

It seems that the idea of writing about this subject came after the band posted in a blog a question to its fans; they had to answer about what they were ashamed for.

So, we ask the same question to you….what are you ashamed of?