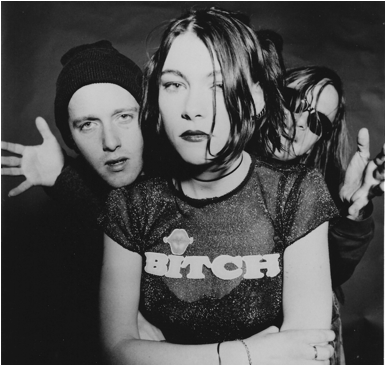 The original members of Melbourne’s 1990’s dynamic post-punk pop trio, Moler, are celebrating 25 years since they first formed with a special one-off reunion show in Melbourne.  Gracing the stage of The Curtin Hotel in Carlton on Friday November 23 will be founding members Helen Cattanach (Helcat) on bass guitar/lead vocals, Julien Poulson on lead guitar with David Peacock and Steven Boyle sharing the drums.

According to music journalist, music historian and author Ian McFarlane, “[Moler] built-up a buzz around the Melbourne independent scene with its mix of noisy guitar fuzz, hard-driving beats, strident pop melodies and Cattanach’s alternately sweet’n’purring and aggressive vocals.” Moler had it all – triple j high rotation, ARIA noms, and killer support slots alongside international acts Weezer and Ash, and much loved locals The Fauves, Cosmic Psychos and Magic Dirt.  Moler were also a part of the 1997 triple j Turn Up Your Radio Tour, alongside The Mavis’s and The Earthmen.

Originally called Snuff, the trio broke onto the scene with their five-track EP, Driven (1995), soon after they changed their name to Moler and signed with Mushroom Records offshoot, Infectious Records.  They hit the ground running with their unique brand of heavy rock laden with searing hooks, scoring a spot on popular ABC Saturday morning music program, Recovery, with a blistering performance of Shopping Trolley, the lead track from the trio’s debut EP On Special (1996).  Wasting no time, they released a second five-track EP, Coaster, in September (1996).

In early 1997, Peacock departed the band with Steve Boyle replacing him on the skins.  It is with Boyle they released four-track EP, Infatuation (1997), the title track was added to high rotation on triple j and also featured on the band’s ARIA-nominated debut full length release, Golden Duck (1997) alongside popular singles Invite Me To Your Party and Red Light Disco.  In 1998, Boyle was replaced by Damo Costin (Motor Ace) for the single release of Delicious (1998), however Costin’s time with the band was short lived with Motor Ace’s popularity on the rise, and he was replaced byNeil Lynch.  In 1999, Pirates’ Lament was released with yet another revolving drummer, Darren Seltmann (The Avalanches) featuring on that recording.  Mike Glenn (HOSS) joined the band in early 2000 for a tour of the United States in March.  The group’s final release, Red & White Stripes (2001) a four-track EP, the title track the single, featured Geoff Dunbar on drums.  They disbanded in the same year.

The always constant Cattanach and Poulson have remained true to their art.  Julian has taken Cambodian psychedelic music to the world via the Cambodian Space Project, with a recent documentary of the same name going to air on ABC TV.  Cattanach still fronts her own band Los Dominados with husband Mike Alonso, their 5th studio album is being launched later this month.  Cattanach was recently part of the house band for the  ABC Spicks and Specks reunion show, alongside Adalita (Magic Dirt), Kram (Spiderbait), and Ash Naylor (Even) to go to air on November 4th.

Excited to be getting the band back together, Peacock throws his two cents in about the upcoming show, “There’s no new rekkid, in fact our records are so rare you can’t buy/stream or download them anymore from anywhere. So come hear them live, loud and most probably a little loose to celebrate 25 years of Moler”.  Everyone feels a little hazy about the epic whirlwind that was Moler, as Cattanach jokes, “I can’t remember a thing! What happened?”

Moler in four words? How bout five? – Memories, Oscilliations, Loops, Echoes, and Reverberations, says Poulson – adding “We were a band made better suited for art galleries, or more so, for the movies of our minds, than for the grungy clubs of the Nirvana Nineties but what fun we had! Traveling the length and breadth of the country in a vintage Valiant hearse bought from the Wodonga Undertakers…I mean who does that? Moler that’s who! And I can almost feel that old Hemi firing up again”.

Special guests – include supports from Glomesh and Digger & The Pussycats.