Your latest album was titled “Moon Saloon”. Can you share with us the most difficult moment of its preparation? Any crazy/funny behind the scene?

Moon Saloon was supposed to be recorded in 14 days but instead we got an offer to open for St. Vincent in the middle of our studio time.  We ended up using the first two  days and recording the full album in those two days and then Zach and I flew that night on a red-eye to the UK to meet up with St. Vincent for her European tour.  That was a little nutty! 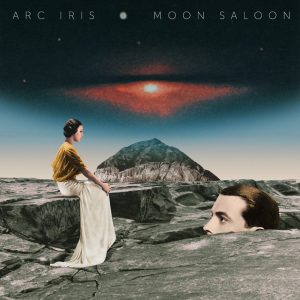 I love lyric-writing.  I usually am commenting on some social phenomenon that I notice and think worth pointing out and discussing.  I like writing lyrics in a way that is both incredibly specific and nonspecific at the same time.  I find that in doing this you can set a compelling scene that gets people thinking but the framework of the story is open enough that a person could insert themselves into that story to help re-imagine whatever events are currently occurring in their own lives.  This is a big part of what art is about – a lens through which to reevaluate reality.

Oh I think that’s for someone else to determine!  I try hard to write lyrics that are worthwhile.  Is there a best lyric?  I really don’t know.  I really like the storytelling in “Lilly”.

I don’t really remember there being a golden standard in our house.  My parents were very technologically in-tune, so when CD’s came out, their record collection became a less well curated CD collection. We listened to a lot of nice music.

For Zach he says Milton Nascimento, one of the fathers of Brazilian Tropicalia music.

You are not the first to ask me this. I am embarrassed to say that I don’t remember.

For Zach, the first CD he ever bought was a live record by Yes called “Yessongs.”

I started out in the world of classical music as many of us did. I then joined The Low Anthem in 2007 and in 2012 broke off to pursue Arc Iris.

There are a few themes holding the album together. The big one being the tensions of society, nature, silence, and noise in the context of the boundaries around both our day-to-day lives and our dream worlds. The questioning we do about what is right for us, and the ideas that we have about our dream life are not always a good representation of what our true dream life would be. Everyone has the opportunity to filter and compose their own existence from the daily mess that must be waded through. Some are better at distilling their pursuits than others. What’s the deal with the mess? What is that magical skill?

I see “Moon Saloon” the song as important because it is a straightforward version of these concepts. The tension between the world you live in and the world you could live in can be crippling. Having to choose a path that will define many years of your life is a difficult thing to do, and ultimately, you may never know if you did the right thing. The choices that life presents you with are endless.

Do you remember the day you wrote “Paint With the Sun”?

Paint With the Sun was written as a pure co-write with Zach on a very, very hot summer day in Providence. Our studio is on the 3rd floor and has no air conditioning, so I remember that we were both dripping with sweat while we were working, which was funny to me. The song is about a short story that Zach wrote about some charity work he did as a child.  I loved the story and wanted to turn it into a song with him.

What inspired “Dylan & me”?

Zach mentioned that when people go to see Dylan at a stadium or something, it is more like going to see the Mona Lisa than anything else.  What I mean to say is that you kind of go to be in the presence of the “God” rather than to hear what He has to say.  I loved that idea and flipped it, in a way.  I put Dylan in an anthropomorphic painting for the protagonist to self-validate with.

I don’t know about a best show, but our recent tour with Kimbra was really fantastic.  Every show was amazing.

We hope to release our new record this year, so keep your eyes and ears opened and  ready for more information on that!  We are playing a residency at the Hi Hat this month and will be following it with a tour that revisits the cities we played with Kimbra.