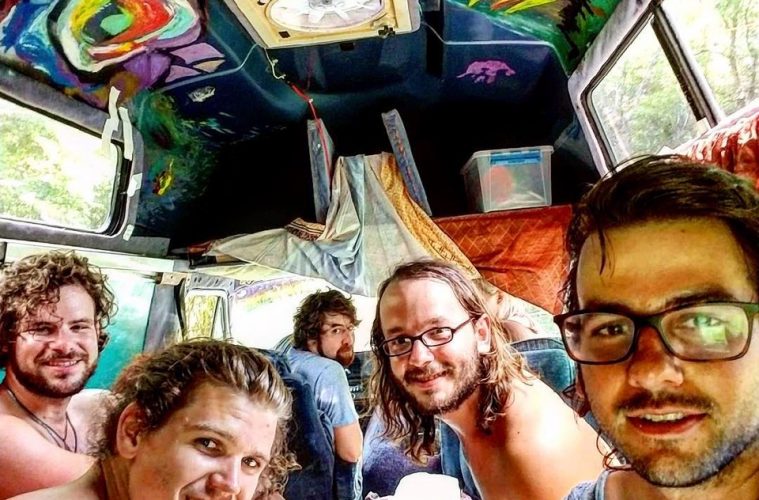 Moonlight – Interview with The Hollow Roots

I usually start off recording myself singing whatever words spontaneously come to me over chords or a riff I’ve come up with just to mostly get a feel for the melody. After that I’ll go back through the recording and write lyrics around whatever it seems like I was trying to express in that moment.

I would say it’s a tie between having a strong melody and honest/meaningful lyrics.

Never. I think music is sometimes the best and easiest way for me to express those aspects. Those personal life experiences are usually the best inspiration and motivation for a song.

I don’t know if I have a best lyric mostly because I think I get a little better with writing with each new song. If I had to pick, there’s a line I like in our song “Easier as it Goes” that’s about being away from family

I feel it in my bones

any time youre not with me

but youre still not far from home

and thats where my heart will be

What inspired “Moonlight”, part of your latest EP? And “Cry”?

Cry is about a bad breakup – wanting someone to “cry” and feel as miserable as you do even though the hurt feelings might be entirely your own. It’s also a warning from the “dump-ee” to the “dump-er” basically not to come around anymore – basically trying to cover up being hurt with a layer of toughness.

Moonlight is about anxiety. Sometimes when I’m up at night, worries running through my mind, it almost feels like my fears are having a party in my brain and I’m the cranky, old neighbor next door yelling at them to “turn it down!”. I thought it would be interesting to actually personify those fears almost as monsters, partying in the “moonlight” ultimately its about learning that anxiety is something you have to co-exist with. If you cant stop the “party” you might as well join in kind of sentiment.

Do you remember the day you wrote “Scars”?

I do! I had come up with the riff and basic melody for the song and Natalie, who was the second vocalist for the band in its early days, came over to my college apartment and helped me plot the whole thing out. We wrote my favorite part of the lyrics together – I threw out “I’ve been slandered and libeled” and she came up with the next line “bruised by the Bible” which is one of my favorites.

I’d like to think the best moments are still coming! But the very first time we got in our van and hit the road for a tour is definitely a highlight.

Worst moment is a tie between two horrible gigs – one was a pay-less gig where we essentially opened for karaoke night, to an empty bar with zero applause, just to have everyone pour in right after we finished and give roaring applause to the karaoke singers. Basically Karaoke headlined that night and crushed it.

The other was a restuarant gig where the sound guy and owner clearly hadn’t listened to us before booking us, immediately told us to turn down during soundcheck, and then basically told us not to play any of our original music and just play “blues standards.” We agreed to those terms, for whatever reason, just to have everyone in the restaurant walk out anyway.

We’re releasing our second album, which is a really big thing for us – so a lot of promotion for that. We’re also definitely hoping to keep getting bigger and better gigs and hopefully get on a festival or two.