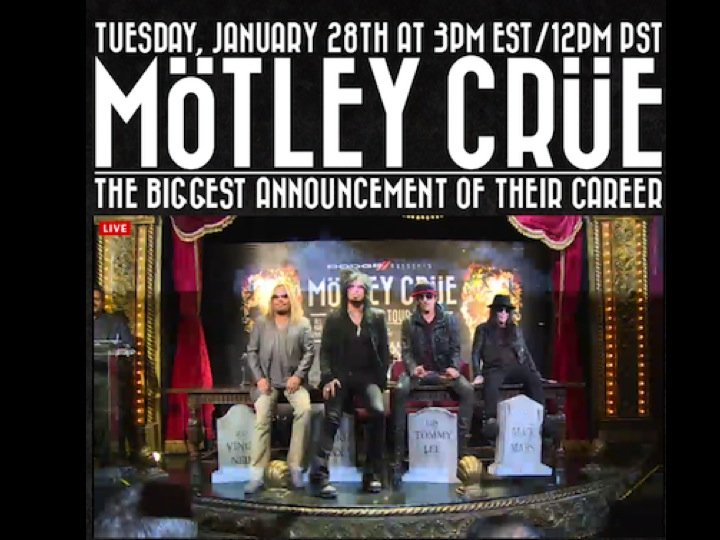 Motley Crue – All the Bad Things Must Come to an End

That’s it, they advised us with a countdown that killed us during the last ten days, today, (28th January 2014) they were having the most important announcement of their career.

The press conference started not more than two hours ago and , in front of us, we found four gravestones with the names of Vincent, Nikki, Mick and Tommy.

We realised that it was all true….. the last tour of Motley Crue was about to be announced. 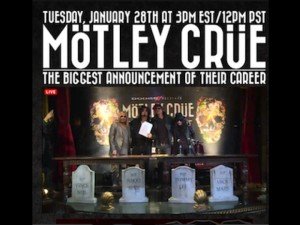 Of course, in pure style MC, this did not come without surprises…..

For this reason, they decided to sign, in front all the press, a contract that obliges them, at the end of the tour, not to use the name of Motley Crue for their personal benefit.

MC will die(legally) from the moment the four of them will walk down from the stage of their last show.

What the four of them are going to do after? Vince will dedicate time at his chain of restaurant and will tour with his music, Tommy has surprises that cannot tell us yet, Nikki will continue his project as DJ with SIXX Sense and Mick will write a book and release his solo album done in cooperation with important musicians from Nashville, where now he lives.

The band didn’t speak about the health problems of Mick, they insisted in leaving while they are still at the top.

The second surprise is that, in this final tour of 72 worldwide shows, they will not be alone….Alice Cooper (present at the press conference) will be opening for them.

And this, is a great news! MC and Alice always loved each other but never toured together.

Alice, commenting the fact that the band initially found inspiration looking to what he was doing said: ” There are millions of Peter Pan bands out there, but no one is Captain Hook, so i decided to be him and I will be, in this tour, Motley’s spiritual advisor……they need it!”

Again Alice said that rock music needs to change and go back and find the spirit of the eighties,where a lot of groups had a lot of fun……” we need band that want to do a show, that want to kill the audience…..like me and Motley Crue”….. “Bands are not fun today, they take themselves too much seriously”.

Tickets for the tour will be on sale starting from 31st of january, follow, for more information, their website http://www.motley.com

They really want to have as much fans as possible, for this reason, a lot of tickets will be priced at only 15 US DOLLARS

What are you waiting for! Do you want to be part of a tour that will mark the history of rock n roll?