Is there a link, lyrically speaking, among all the songs of your upcoming EP?

They were all written not long after the horrific news that David Bowie was gone.

They were inspired by his impact and the concept of creating without bounderies.

I have been filling up notebooks and drawing pads since I was 13, so I seem to always have a lot of words to choose from.
But when a song comes to me as intensely and sporatically as they did on this album, I wound up writing the words as soon as the piano or guitar was in my hand,

What inspired “two under two”?

Our two girls that were both under 2 years-old earlier this year when I wrote it. I was exhausted and needed to get out of the house and over at the nieghborhood bar where there were a few band playing and some friends of mine hanging out there.

I was at the bar probably no more than 20 moniutes when all I wanted to do was be back at home with the girls, and my wife, A lot of people think I’m saying “bottle of wine” in the chorus but it’s actually “bottle of white” regarding their bottles of milk.

and “ the world is a teenage bedroom”?

Driving home one night i kept noticing how messy and dirty the world is if you really look closely (and sometimes not so closely).

It got me thinking how people come into this world and leave  their mess behind, their footprints, fingerprints, clothes, graffitti, magazines, tire marks and so on.

Well, man, that really makes me do some thinking right there.

For some reason the opening of one of my songs that pops into my head first :oh you were a symphony of syllables, ever since you were cut from the umbillical, touchin’ down on Earth like a miracle for me” 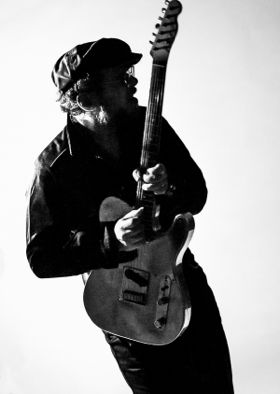 what does music mean for you?

The only thing that makes any sense.

what makes you happy? And upset ?

do you have any upcoming tour plans?

November 4th I’ll be playing at The Basement in Nashville.

do you remember the day you wrote “double neck”?

I just remember deciding to sing the unlikliest melody i could muster for an idea of aong that’s about something I saw the day before.

I was in a guitar repair place and there was an older guy with white hair and a belly working on a guitar.

On the wall was a picture of this super cool dude with killer pants and hair past way past his shoulders rockin’ a Les Paul.

Turns out it was an old picture of the guy fixing the guitars behind the counter. It takes a long time to realize that older people were all younger people.

Which kind of makes them cooler in may ways, cause they don’t need your approval anymore. Something like that, anyway.

The song made me smile while I wrote it and that’s always a good sign.