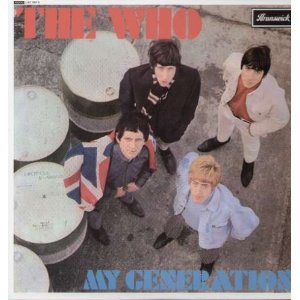 Who doesn’t know “The Who”……… who doesn’t remember the amazing voice, the blond curly hair (and blue eyes) of their singer Roger Daltrey and the solos of guitar of Pete Townshend?

If you add Keith Moon (RIP) one of the best drummer ever existed and John Entwistle you will have the full band, formed in 1964 and now (finally) in tour in USA.

We could write entire books about the lyrics, the life of the band……. Did you know that Keith Moon, for instance, loved explosives? he liked them so much that every tournee he was bringing them along and…… blow the toilets of its hotel room!

A true crazy rockstar! A way of expressing himself for others…..

The Who is the most representing band of the subculture of the MOD (modernist) : significant elements of the mod include fashion (often tailor-made suits),music and motor scooters.

A statement, above others, represent the “mod” way of living:  “LIVE SMART UNDER DIFFICULT CIRCUMSTANCES”

1965 is the year of My Generation not only a very successful album but also the song, written by Pete Townshend while he was in the train in the direction to London.

In this song Pete is describing the fights and the rage of his generation that tries to be listen and understood by the people.

The Who definitively contributed  on that rebellious Rock and Roll that, in the seventies, will become PUNK ROCK