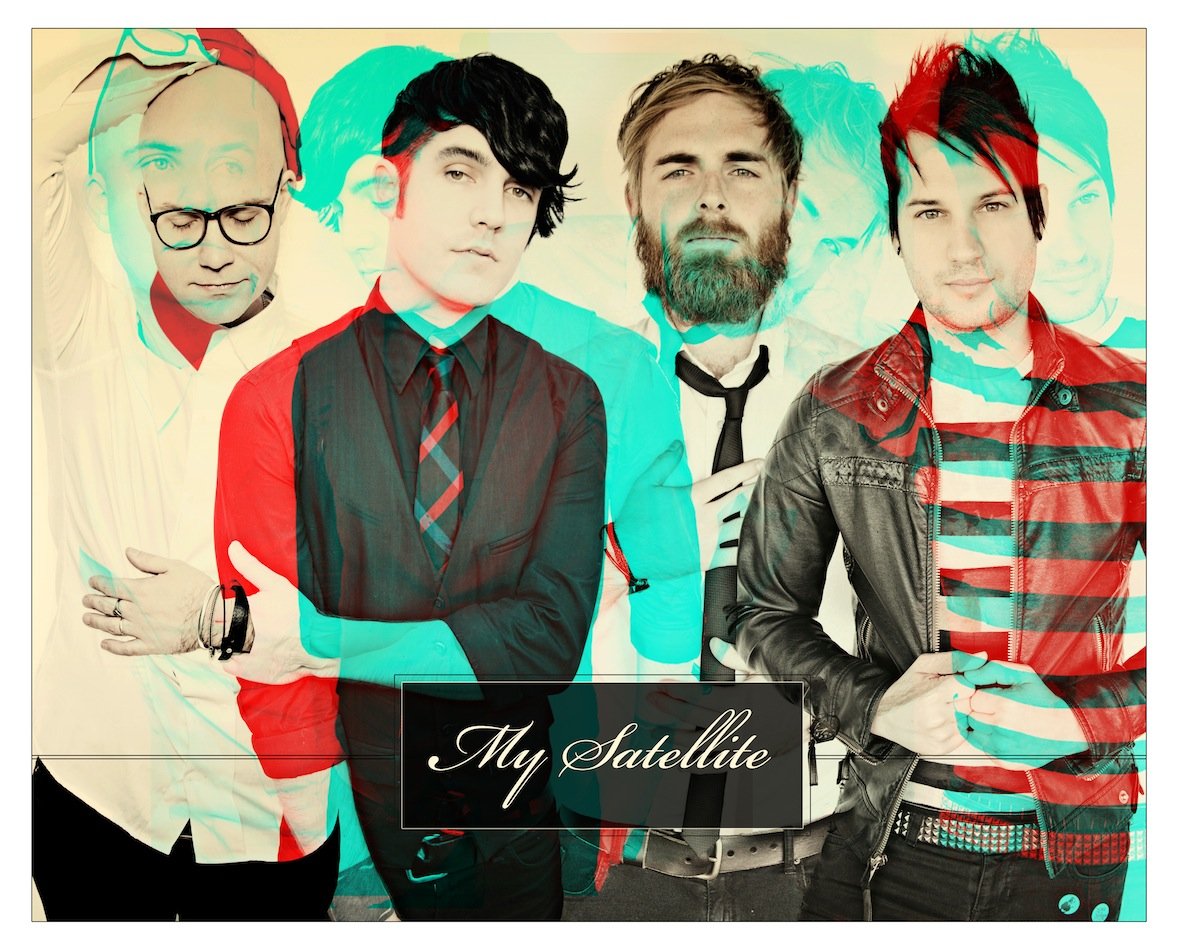 “A good soundtrack for a long night drive as you leave LA behind” this is how Bryan Stage, the singer of the band, defines the music of My Satellite.

Their new album should be released by the end of the year, while preparing it, Bryan answered to our questions…..

RYL: You released two EP in very few months, the last one titled “Depths” last February 2011, how your lyrics writing evolved from one album to the other one?

MS: I think there was a lot more cohesion in Depths. Telescopes was kind of an experiment to see what I could pull off. I didn’t have a very clear goal. I just knew that I had music inside of me that needed a voice and it was the first time I was moving away from purely guitar-based music. By the time I started writing Depths, I had a much clearer vision of what I wanted and how my writing process works. Perhaps it’s an indicator of where my mind was at the time, but I also think that Depths is darker album than Telescopes, both sonically and lyrically. Not to say that Telescopes is full of dandelions and smiles, but to me, Depths is pretty bleak.

RYL: The song “Dearest Autumn” is one of our favourites, it talks about a new beginning isn’t?

MS: Absolutely. It’s about change and the energy and hope that comes with that. There is a very romantic aspect to that song that hints at a new love or partnership which inspires us to leave the old, dead and lost person that we were. The elation that we get when we meet someone new who elevates us, or we travel someplace new and exciting or basically start a new chapter in our lives is such an incredible feeling. It’s something that for a lot of us only happens a handful of times in our lives. It’s fleeting and all the more beautiful because of it.

RYL: In your website (http://mysatellitemusic.com) you are saying that you are preparing a new album, can you tell us some insight? We are very curious….

MS: Yeah! This album will be our first full-length. We’re really excited about it. We’ve been in the studio all year, tracking it ourselves, which has been a really great experience. This is the first time that I didn’t play and record every instrument and vocal myself. The first two albums were essentially a solo project, which I loved, but it needed to evolve. The band brought some great input into the production and writing process and I think the end product is a much tighter and more mature sound. We really stretched ourselves creatively and took some risks artistically and I think it’s paid off. We’re almost done tracking the album and pretty soon we’ll be setting up a crowd sourcing project so that our fans can get involved and help us get make this album become as big and beautiful as we know it deserves. No release date yet, but it will be out later this year. We’re stoked to get some new stuff out there!

RYL: In the song “Golden Gloves” a recurring theme is the one of drinking, which is the relationship between that and the title of the song?

MS: I wrote those lyrics drunk on scotch so you could say it’s a pretty direct relationship. On the surface level it’s referencing the golden colour of whiskey and the feeling of warmth and impenetrability that intoxication can bring, but on a deeper level it alludes to the falseness of that warmth and impenetrability. They are only gloves, after all. The lyrics decry the emptiness of society, but in the end you realize that loneliness is what you’re really fighting. The basic idea being that your hands can fight the world encased in shimmering gold, but if the rest of the body is naked and cold, gilded hands are worthless.

RYL: The city of Los Angeles is the “city of light” , how much energy you are getting from it?

MS: The city is very much a part of the music and the creative process. Los Angeles isn’t a town that throws itself in your face. It’s always kind of doing it’s own thing and you can choose to join in or just observe it all from a distance. There is an air of indifference here, which for an artist can be a huge hindrance because you have to look hard for the right experiences and inspiration. I view it as an asset because I can run my fingers along the pulse of the city and then easily escape it and create from that experience. My Satellite is escapist music. It’s something you put on when you’re alone. I’ve always felt this music is a good soundtrack for a long night drive as you leave LA behind.

RYL: Tell us about your new tour? When your fans will be able to see you?

MS: We’re still pretty deep into the album creation process so we’re not touring yet, but we will start getting back out there locally in a couple months and beyond California after the album comes out.

RYL: Can you tell us about the song “Mirrors”? Reading its lyrics we had the feeling that the only one able to save the protagonist of the song is, at the end, himself , do you agree with it?

MS: There is truth in that. Only we are responsible for helping ourselves. But I think the character in the song is too blinded by his loneliness to see that truth. He’s reflecting on choices made and questioning whether he will end up wishing he had taken another path. He’s thinking about the fork in the road that he passed a while back and is now just out of sight. The protagonist gets to a point where he feels scared, isolated and worried about dying alone if his path leads to failure, which almost seems imminent. He recognizes that he chose his position and knew the risks, but feels helpless and far too weak to change it.

RYL: Your sound is very special, how you would define it? How do you create your music?

MS: Our music is the soundtrack for an intimate adventure. I like to think of it as a sea of sound inspired by life and beauty. Every song generally starts as a small idea and we keep toying with it and building onto it until it finally reveals the form that it’s supposed to take. The path to the end result has been different with each song. Sometimes I don’t even know how parts of the song came to be. That’s what makes music so special. The inspiration just comes from somewhere and all you can do is hope that you can properly receive it and do it justice.

RYL: A recent change in the lineup of the band, how this will affect the new album preparation?

MS: We lost our keyboardist earlier this year which was unfortunate, but Sammi was never very involved in the writing of the music and she left the band before we entered the studio so it really didn’t change things too much. There were some vocal parts that I had specifically written for a female voice and it was too bad that we were unable to have her sing them, but we called in some favours to have friends help us out. Lineup changes are always a bit challenging, but we feel like we’re in a really good place right now.