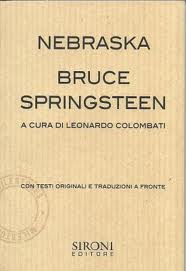 If you are a fan of Bruce Springsteen, for sure you know that Nebraska is the title of his sixth studio album released in 1982, 32 years ago.

A very special album that has been recorded in a very special way (as a demo on a music cassette), in a very difficult period for Bruce (he was apparently on the edge of depression).

The songs are both inspired by his life when he was younger (Open All Night, Mansion on the Hill, Used Cars and  My Father’s House) and, as well, by stories of misfits, outlaws, criminals and mass murderers  (six songs inspired by the books of Flannery O’Connor and Walker Percy).

Leonardo Colombati, author of this book published in 2012 by Sironi Editore,  is going back to the roots of each songs explaining, in a very detailed way, their “behind the scenes”, adding also the full transcription of the lyrics and their translation in italian.

On top of it, Bruce Springsteen decided to contribute personally to the book adding a very intimate explanation on how he wrote these songs ( we don’t want to ruin the surprise, so, in order to know more you must read the book).

PS – to all our readers: we know there is an italian version of the book and we hope, for you 🙂 , there is as well a english one.