NEVER WAIT FOR ANYTHING – Interview with Brendan – FAR AWAY STABLES

RYL: “ATLANTIS” has just been released, which is the most important thing you learned from it?

FAR AWAY STABLES: The most important thing we learnt from ATLANTIS is to always keep working hard and search for new opportunities.

Never wait for anything.

We did a lot of great things early on in our carrer and were told there would be more, so we became complacent and waited but the promises never eventuated and this was disheartening for us which caused the slowing down of our machine.

ATLANTIS is about reigniting the Far Away Stables flame within us, the burning passion for our music and the dream to have a successful career.

Within this we also learnt to maintain our relationships with one and other because for the most part in this industry the only people we can rely on is each other.

Every decision has to be made with all of our band mates best interests in mind and not only our own. There is no room for selfishness.

A band is not a collection of idividuals, a band is a unit. We all need to be reminded of that from time to time within this world ruled by ego.

FAR AWAY STABLES: This is a tough one as I have a personal connection to all of the songs but I would have to say “What Are You Waiting For?” Is my favourite.

Every time I listen to it i feel inspired.

It has such a positive and uplifting vibe. 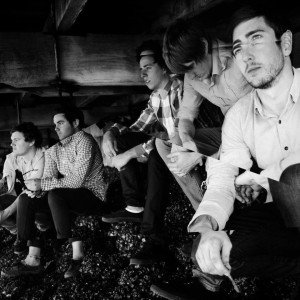 FAR AWAY STABLES: The lyrics for our songs are very personal to us so they always begin with the feeling of a strong emotion towards something and once that’s jotted down we can reassess that feeling and refine it.

They are never “forced” out. A lot of time and care is taken in the wrtting of the lyrics so to express clearly what we want to say.

I think the best verse I wrote for ATLANTIS would have to be the second half of the “Understanding The Depths” ending.

“so lets petend that we understand the depths

Of whats burried in our chests

What we’ve evolved to hid behind the sternum

Or is it pride

It’s a power you cant ignore

Spend a lifetime searching for

But will we ever know.”

This is largly about my constant battle of belief in myself and in heaven.

RYL:  What is the meaning behind “In My Head”

FAR AWAY STABLE: “In My Head” is about using drugs to hide from your problems and ultimately creating more while worsening the ones you’re running from until you hit the bottom and are left with no choice but to turn and face them.

At this point they tear us apart and it takes a while to rebuild.

RYL: Do you remember the day you wrote “A Beggar’s Plea” ? what inspired its lyrics?

FAR AWAY STABLES: I do remember the day actually. We were at Mitch’s girlfriends house and nick started playing the opening riff and the song developed with such a positive feel.

The lyrics were inspired by Thích Quảng Đức, a Vietnamese Mahayana Buddhist Monk who burned himslef alive in protest.

The lyrics are about staying true to your character and beliefs even through the hardest of times.

FAR AWAY STABLES: I would definitely have to buy “living Together” by Circa Survive. The feeling I got from hearing that song the first time is what inspired me to become a singer.

FAR AWAY STABLES: Well, currently we are on tour across the united states taking part in the Epic Proportions Tour and are in Phoenix, Arizona. We are from sydney, Australia so we are a long way from home!

We have about six more weeks left where we will be touring all through california then heading over to new york city and up to toronto.

Once we get back home we will set out pretty much right away on a headline tour of Australia then head over to south east asia to play all thought that region of the world.

Exciting things ahead! Oh and we will be writing an album amongst that somewhere.

Our best show today for me was supporting Paramore to a sold out crowed in sydney.

The response from the audience was overwhelming and the energy I felt that night was a deeper confirmation that music is what I want to dedicate my life to.

RYL: “Doing Better” is our favorite!,  what inspired its verses?

FAR AWAY STABLES: Doing better is about the end of a relationship and the emptiness we feel at this point in time and the way we use other people to to distract us from our despair and then the dirtiness and regret we feel afterwards.