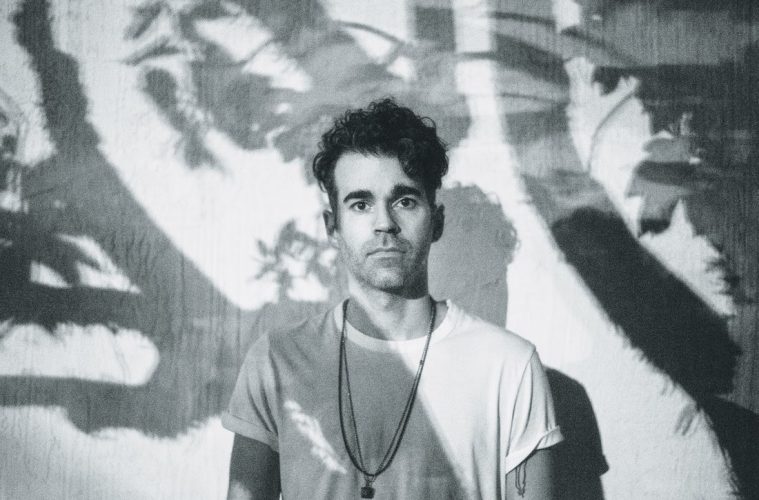 How do you usually write the lyrics of your songs?
During the initial moment of creation of the song, I generally don’t have too many lyrics, but often the core lyrical idea will come out of the subconscious.  I’ll just be singing along to the feeling that the music I’m playing creates in me. I almost never have an idea for a song and then sit down and make it. I get inspired by the sound and emotion that’s coming out of the instrument, or from the beat I’m making. To finish the song I sing in a kind of gibberish to write the melody, and I often transcribe this gibberish phonetically, and I try to keep the same vowel sounds and match them to the concept of the song that I devise by pacing around the room, going for walks, or writing in my journal.  I have to change some of the vowel sounds of course, but that’s the challenge I place for myself is how does it sound and then what does it mean.

In your opinion, what is the most important thing in songwriting?
To have a reason for the song to exist.  You can’t just write a song because you can or want to or need to.  There has to be a reason for that song to exist, something deep inside you, an ache, a desire, a joy.  The most classic and timeless songs are all like that. They feel as recognizable in the sonic landscape as a tree is in a forrest.  They belong. A song that doesn’t belong is a balloon that will float up to the sky and pop.

No, that’s the whole point.  To reveal things in the shadows.  To obscure and bend the light. It’s like writing the most personal thing in the sand and then watching the sea take it away.  For me music has always been about saying what I cannot speak. It’s an outlet for homeless feelings.

What is the best lyric that you ever wrote (the most meaningful for you)?
My favorite line is often “shadows make things easy, and so I made you mine” because it is literal and figurative.  I was walking around my college campus at 3 in the morning with a girl I didn’t love, but would soon date for almost a year, because I was swept up in the notion of falling in love.  I didn’t wait for it, because all the trappings of love were there. That’s the shadows making things easy. But literally also it was easy to kiss in the shadow from a street light. Those are the best lyrics.  When the personal and the universal collide

What inspired “Stolen Liquor”, part of your latest EP “New Jersey”?
The title refers to my friends and I in high school stealing liquor from our parents’ basements and walking around the neighborhood drinking this brave concoction of orange juice and whatever we had pilfered.  The song is about mocking death, and I think that’s what children do in those moments. They say, “oh yeah, you’re gonna get me, well, I’m gonna get drunk when I’m not supposed to.” Every act of rebellion is in defiance of the one force against which we can never rebel: death.  The verses of the song came later, and their more conceptual, about how a desire for fame is a grownup version of that rebellion. The first verse is inspired by YouTuber culture, and the second by pop starlets, the daily lives of which I find fascinating.

And “Summer Of My Discontentment”?
This is the linchpin of the whole EP.  I’ve always wanted to write about my time in New Jersey because I had a core group of friends, accepted misfits like myself, who were allowed to sit at the table, but had no interest in drinking the kool-aid.  We were as close as brothers, and we would always tell each other we would never meet better friends, and now, I don’t speak to any of them. The song is bookended by the song “Last Goodbye” from Jeff Buckley’s “Grace,” which we used to sing at the top of our lungs in the car driving aimlessly around the outskirts of town.  I mention the album again, all these years and experiences later, a million miles physically and mentally from that time, but there I was, listening to the same song, alone in my car with the windows up stuck in traffic in LA. It just struck me as so poignant. All those dreams from my youth were there, with me, in that car, and that’s what they had become.

Do you remember the day you wrote “Love Is Wasted In The Dark”?
I do indeed.  I was sitting on the couch of my friend’s house in the Hollywood Hills, looking at apartment listings and keeping his plants alive while he was gone.  And I just suddenly heard not the riff itself but the notion of the riff, a pulsing, square, robotic rhythm with notes clustered together, and I rushed to his piano, and played exactly what you hear on the record.  From there I found what chords would fit with it, and I recorded a demo version into my computer, singing the melody into my iphone earbuds microphone. I actually worked on the lyrics the rest of the day until I had almost finished it in one sitting, which is always best.  The final verse came together the night before I had the studio booked to record it.

Is there a link/a common theme among the songs of the new album?
They all deal with different aspects of the notion I discovered from writing ‘Summer of my Discontentment‘.  My particular brand of nostalgia was not to be back in that time, because I hated most of it, but to be able to feel like I did in that time.  To dream openly and optimistically. Once you have lost enough things, it is difficult to hold something without fear. And I long for that peace, which yes, did come with its own anxiety and ache of not even being who you were, always becoming, but much is lost in the becoming, and that’s what the EP focuses on, at different stages of my life, and from different angles.  Romantic relationships, friendships, my relationship with myself, and with my dreams.

What is the best suggestion your producer gave you?
I think you can do it better.  The last thing you want to hear, but the best favor someone can do for you, as long as you trust their taste.  Never listen to people who’s taste you don’t trust just because they’re in the room with you. I’ve lost a few songs to my own openness to other’s opinions.  It’s a delicate dance. When do you trust yourself and say everyone else is wrong, and when do you recognize your own hubris? It’s an impossible equation. You just have to listen to your stomach.

What are your plans for 2019?
going on a national tour in May and June, putting out a few videos, writing songs with friends, I kind of want to put out a “friends” EP of all the collaborations I do for fun with other song writer friends, and I also am always thinking of an acoustic album.  But I do have to focus on making the companion album to ‘New Jersey,’ which I want to put out in the fall, my first full length album in many years. I just need to get enough songs that speak to each other, I want it to be very grand.