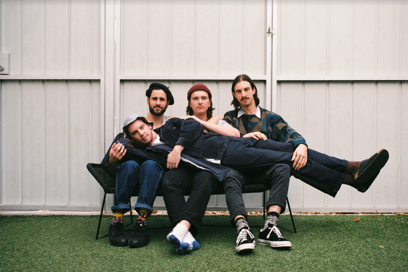 Not My Fault – Interview with Mylk

rockyourlyricsAugust 20, 20190 views
Rock Interviews0 views 05 min read
How do you usually write the lyrics of your songs?
Usually I write songs by either having a complete instrumental track already and then using the mood and texture of that instrumental as inspiration for lyrics or a story, or I have a certain theme in my head that I would like to write a song about and the lyrics come first, with the instrumentation coming after.
In your opinion, what is the most important thing in songwriting?
The most important thing in songwriting is to enjoy it and to make it as truthful and honest as you can, no matter the subject matter. An audience can always tell if something isn’t genuine and will be more engaged with a song if they feel that it is coming from a real place.
Are you ever scared of revealing aspects of your personal life/experience to strangers through your music?
Music for me is an emotional outlet, and if I were too scared to reveal aspects of myself through my music, then I wouldn’t be writing music. Sure, it is daunting to think that people you don’t know might be able to see into what you’re headspace is, or your more personal thoughts, but the reward of a relatable piece of art and giving people something real to listen to is overpoweringly desirable in comparison to being a little embarrassed.
What is the best lyric that you ever wrote (the most meaningful for you)?
All of the lyrics I write tend to have a lot of meaning to me, whether they are the smallest, most uninspiring lyric or something that holds a lot of emotion, I try and write lyrics as truthfully as I can. Probably the most emotive lyric I believe I have written is “Sometimes I cry when I laugh” as it reminds me of personal turmoil.
What inspired “Not My Fault”, your latest single?
The main inspiration for the song was just the chorus melody that I hummed in my head at about 2am in the morning. After that I just had to write a song around that melody and after about 40 minutes with the rest of the band, ‘Not My Fault’ was born.
Do you remember the day you wrote “I Want You”?
The day we wrote ‘I Want You,’ we were jamming and just so happened to play the right few chords at the right time. I want You was written out of pure luck, as none of us had any idea that in 30 minutes we would have a new song when we started. Harry was actually in the bathroom for a lot of this process and therefore he plays the bass on this track.
And “Internet Café”?
‘Internet Café’ was written purely off the back of the intro riff that repeats throughout the song. I also wanted to incorporate a ‘chant’ that built up throughout the bridge so we did just that. That song was written very very early in Mylk’s career and it is still one of our favourites.
Are you planning to release a new album/EP?
We are definitely planning on releasing more music and hopefully that will be out for you to listen to sooner rather than later!
What is the best suggestion your producer gave you?
To play live when recording. We are a band, so to get the most accurate representation of our sound, we should play every song like we would when we are playing at a gig. That way, the mood and energy from the songs really shines through in the recordings.
What are your plans for 2019?
To keep playing as many gigs as we can and to record some more stuff!
To conclude the interview a short Q/A session, please answer the first thing that comes to your mind: