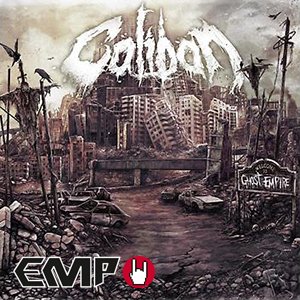 Nothing is Forever – interview with Caliban

Caliban (http://calibanmetal.com) are back with a new album “Ghost Empire” set to be released in january 2014; in the meantime, starting from today, their first single “Devil’s Night” is available (http://emp.me/7gJ) for their fans.

Rock Your Lyrics interviewed them for you……

RYL:  On January 27, 2014, Caliban’s tenth studio album Ghost Empire is set to be released; will it be a year of special celebrations?

Caliban: Actually it’s our  9th studio album if  I remember it right (RYL oops, sorry for the mistake 🙂 ), but whatever, let’s celebrate anyway ; ) But there is nothing planned so far, but we have a whole year to work something out, right!?

RYL:  What are the main inspirations behind the songs on this new album?

Caliban: I listen to the new songs and try to catch the right mood for the lyrics. After that, I think about some topics and ideas for the songs and then I start to brainstorm and write the first lines…sometimes I just need one line to build a whole song around it and sometimes it takes forever. It always depends on my mood…

Caliban: The scene in Germany is quite ok I would say, but to be honest I don’t know what crisis you’re talking about… If you mean the money crisis in Europe, I can tell you, that it’s just a matter of time when we’re fucked as well!!! The music download increases and the sale of records are sometimes disappointing.

RYL:  What inspired the lyrics to “Broadcast to Damnation” off your last album I Am Nemesis?

Caliban: The crap on television. All the brain-dead “real-life-soap” bullshit that makes people numb and blind…it’s too much to handle…I hate television most of the time…

RYL:  What is the most important thing you want to have when you are on tour?

Caliban: I need my laptop to watch quality TV-Shows, my iPod for good music, my phone to get in touch with my loved ones and a lot of food…I LOVE to eat!!!

RYL:  What was the craziest gig you have played thus far?

Caliban:  One of the greatest shows I remember is the Woodstock Festival in Poland. It’s an open air festival with about 400.000 people, it’s unbelievable to play in front of so many people!!! It’s maybe not the craziest show we ever played, but this is the one in my mind ; )

RYL:  In “We Are The Many” you speak about being together and being unified in a battle against who and what?

Caliban: You can see it in different ways: against politicians and their lies, against the society and it’s greed, or against a random oppressor…there is always someone to blame ; )

RYL:  Let’s go back to your first studio album, A Small Boy and a Grey Heaven; if you had to pick a song that still represents you, which song would it be? Why?

Caliban: I think it would be “arena of concealment”. It was one of our favorite songs at that time and we picked the song for the second split with “heaven shall burn” and made a new version of it. The song is different compared to the new stuff, but it’s still heavy as fuck.

RYL:  Your last music video is for the song “This Oath”; in this modern society, how much importance do you give to an oath? Do people believe in them?

Caliban: I hope so, at least when people get married for example! I try to stick to it, if I make an oath… I also think it’s more for the older generations, but I’m old school and I like it!

RYL:  In 16 years of career, what is something that you have not done and wish to do?

Caliban: I always wanted to play a show in Africa or in Iceland, but I still have hopes!

RYL:  What is for you the definition of “Metal” today?

Caliban:  I don’t know that much about the “real metal”, but the metalcore is growing and growing with many different influences and the kids are more open minded then in the past, at least most of the time. The metal-guys today wear tight shirts with crazy colors, tight pants and a styled haircut ; )

RYL: Which are the best verses you have ever written in a song?

Caliban: That’s hard to say and I can’t pick any specific line for that matter, but one of the lines our fans like very much is “nothing is forever”. That one is tattooed a lot ; )