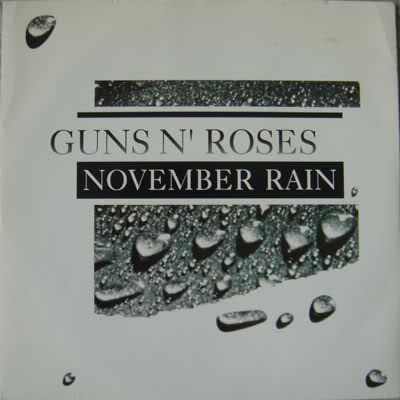 Guns and Roses, a band formed originally in 1985 by Axl Roses (vocals), Izzy Stradlin (guitar), Duff Mc Kagan (bass guitar) , Steven Adler ( drums ) and one of the most famous guitarist of all time Slash.

GNR are the rock soul of the nineties , they bring back the old rock of the seventies and they play it on a modern key.

The year of November Rain is the 1991, the same year of Nevermind of Nirvana and the same year of USE YOUR ILLUSION 1 and 2 two albums that, after Appetite for Destruction, marked the history of rock n roll and of Guns and Roses.

After the two albums the band decided to go in tour, but not a normal one…..28 months on the roads…too many for Steven Adler that was fired before the tour and replaced by Matt Sorum. 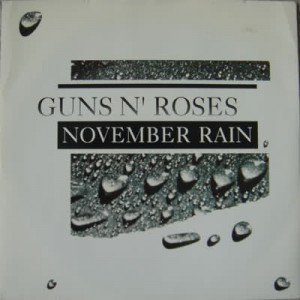 Also Izzy left the band that started to become out of control…..wild parties, wild expenses and a lot of concerts canceled or just delayed for hours…….pure madness .

Even Metallica couldn’t handle that much of wildness.

November Rain was written by Axl Roses and it describes a story of love and it will be the most favourite song of Axl that initially wrote it in 1983 for the album Appetite, while the band didn’t like it , so the release was  postponed for almost 8 years.

The song lasts pretty much, 8 minutes and 57 seconds, but it is not the longest version ever created; there is one made by Axl and the guitarist of Nazareth Manny Charlton that lasted over 18 minutes.

Even the music video is very personal for Axl that decided to do it with Stephanie Seymour, his wife.

The priest in the video, an italian man named Gianantonio, was a friend of Rose. Unbeknownst to the band, the church used for the interior shots was where the priest had performed some of his last services, eight years prior to the shooting of the video