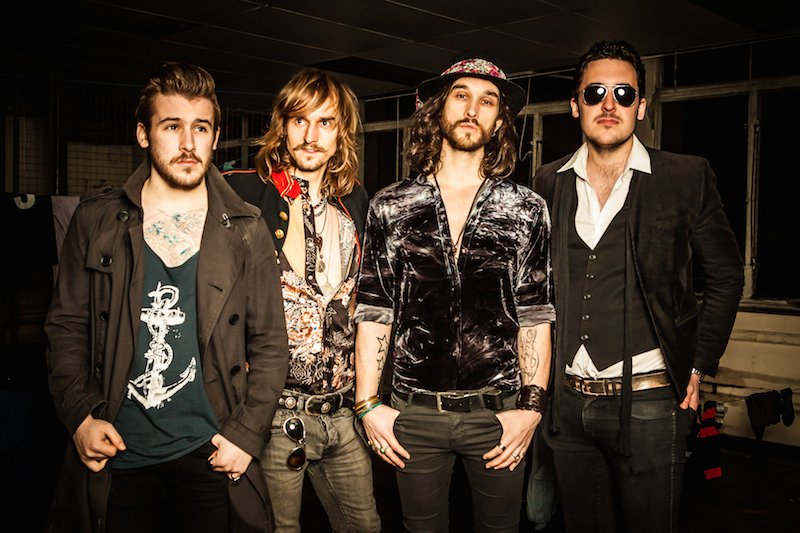 RYL: A month ago your new self-titled album has been released…how do you feel? How was the reaction of your fans?

DIRTY THRILLS (http://www.dirty-thrills.com/): We’re so hyped right now. We have working so hard on this album, and now the hard work is paying off and we can start having fun touring the album. The fans have been amazing, we have had such awesome feedback from the record.

DIRTY THRILLS: Not really. We wrote this album over the space of 8 months, writing a bit here and there. It was us experimenting with writing together as a fairly newly formed band, with an anything goes kinda of attitude. Especially with the lyrical content, we wrote about all kinds of stuff

RYL:  We love “Burning Bridges”, what inspired it?

DIRTY THRILLS: Burning Bridges was inspired by the swagger of Queens of the Stone Age and charm of adding something get slightly different to a mainly hard hitting rock album, the bass and drums played a huge part in the formation of the song and defined it’s character whilst the rhythmic vocal twists and ever changing guitar sounds really gave the final product a huge lift and brought about a really unique highlight of the album.

DIRTY THRILLS: Usually we start writing a song with a guitar riff, and get a basic structure of the music from that.

When we feel inspired, we’ll have a go at fitting some lyrics to it. Being in the write mindset is important to us, as there is no point in forcing out lyrics for the sake of it. This will be either one of us, or a joint effort.

Usually, the songs meaning is pretty obvious at the start of the writing process.

DIRTY THRILLS: Oh you can’t possibly answer this question haha. To name a couple, ACDC – Back in Black, Zeppelin – Dazed and Confused.

RYL: And the one you wrote?

DIRTY THRILLS: Hmmmmm. We’re pretty happy with the verse from our song ‘Follow Me Home’. It’s definitely driving rock and has a great simple shuffle groove on it.

The lyrics fit perfectly, and we’re all really impressed with Louis’ vocal performance on the track.

RYL: What does your songs titled “Rock N Roll” means for you when you sing its lyrics?

DIRTY THRILLS: Rock n roll is not only focused on a musicians day to day life, it’s kinda related to anybody having a rough time, sofa surfing, hitting the bottle just to numb the pain.

There are obviously certain lines focusing mainly on our lives, but generally speaking it relates to everybody in that situation.

RYL: Let’s go back to the album “Growing Young”… the song “You are in trouble now” is the fan’s favorite (according to Itunes chart), why in your opinion?

DIRTY THRILLS: Ha we had no idea it was the most popular ‘Growing Young’ track, that’s great. I guess it shows off every instrument of the band really well. It has insane soaring vocals, dirty guitar riffs, huge drum fills and even a emotive double bass on it.

We love playing it live, and will definitely bring it back to our live set, to play along side the new album tracks.

RYL:  You are currently on tour, which is your favorite song to play live?

DIRTY THRILLS: Tough one. We love playing ‘Rock n Roll’, as it’s high-energy Rock n Roll at it’s finest. It has a great break where the guitar comes in with a killer riff, with the band coming in together shortly after. It really gets the fans going!

RYL: Last question: tell us everything about “Is this home”…

DIRTY THRILLS: Jack jammed out the initial chord progression the evening before tour (living on Steve’s floor at the time). With nothing to do, he quickly got the structure down that night. A few days after recovering, Louis and Jack began writing the lyrics back at his house.

They drew on past experiences of struggle in their families, wanting to take painful memories and turn them into something positive. The chorus line was mainly based on feeling unsettled and questioning if the problems of the past would ever be resolved.

In a way it’s the most meaningful song on the album for both Louis and Jack as it has brought about some closure and allowed them take the positives out of situations that seem mainly negative. Recording the song in the studio was pretty emotional but we are extremely pleased with how it came out and the response we’ve received from both new and old fans.