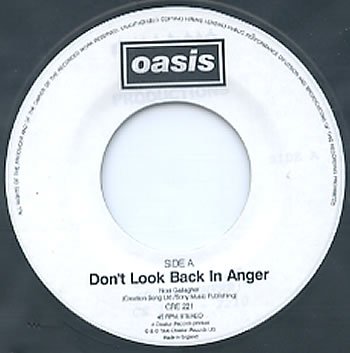 We talked about them the first time when we were describing the song ” Live Forever” dedicated to their mother https://rockyourlyrics.com/live-forever-oasis/ .

Live Forever was part of their first album “Definitely Maybe” and was the third single out of it.

Don’t look back in Anger will come two years later , in 1996 as part of the album “(What’s the story) Morning Glory” that sold over 32 millions of copies as of now and 370.000 in the first week after its release.

Is the album that projected the band to the top of the Brit Rock and among one of the best bands of the nineties.

Noel Gallagher wrote it while he was in Paris together with another famous band : The Verve

How the song was written was very funny, even Liam, we would say, contributed to make it a huge success….

Noel had the chords of the song in his heads and was strumming his guitar right before a concert in the Sheffield Arena…. Liam heard about the song and asked to the brother what he was singing……

the answer of Noel was “Nothing in particular”, Liam than said…..”No! you are singing….SO SALLY CAN WAIT!”

The mind of Noel clicked and he started to write the rest of the lyrics while he was going backstage.

Noel said that even John Lennon has been taken as inspiration …..Noel actually received some tapes from USA that were part of the John Lennon bed -in…..

John was describing about his life and “the revolution that was starting from his bed”………Noel included it in the lyrics of the song.

Regarding Sally …..we really don’t know who is she ….. not even Liam or Noel……. they said …it was just perfect for the verse.

Well, even John Lennon contributed to the career of Oasis…….remember the initial piano part….don’t you recall “Imagine”…..?