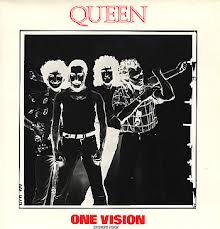 One Vision – The Queen

In 1985 London (and the world) saw one of the most important concert of the rock and roll history : “Live Aid”.

During that show, Queen gifted to the world their most remarkable performance…..in only 25 minutes!!

1985 is also the year when another great song of the band has been released: “One Vision”

Was this song inspired by the Live Aid? …..Maybe…..or maybe just helped the band to “get in to the mood”

The story of Martin Luther King seems to have inspired the band, his fights, his desire of unity with “no black or white”

And the “Fried Chicken” that is used by Freddie to finish the song?

Well, it doesn’t make any sense does it? In fact , it seems that Freddie was just trying different funny words to test the melody and, at the end, decided to leave it as conclusion of the song.