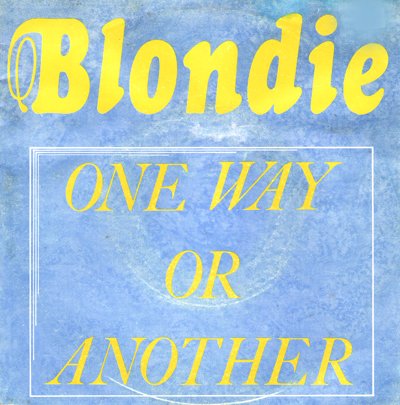 One Way or Another

The “Blonde” of the American Punk Rock: Debbie Harry…………….

One band:  “Blondie” formed with her boyfriend Chris Stein, guitarist.

We are in 1976 in New York, in the middle of the punk scene; Ramones, Patty Smith, Blondie while in UK Sex Pistols are releasing their first album.

In 1982 the band broke up because of health problems of Stein and they reformed in 1997 ; today they are still touring and recording, the last album (the 9th) was released in 2011 with the name “Panic of Girls”.

Among their most famous songs: Maria, Call Me, Hearth of Glass and the song of today: One Way or Another.

1978 Blondie released a best-selling album called “Parallel Lines” that sold, in its history, over 25.000.000 copies becoming one of the best albums of all time for the band but also for the Rock and Roll Music.

Blondie wrote the lyrics of the song thinking about a “stalker” , a former boyfriend that didn’t let her alone……….

The obsession of the stalker back in the end of seventies…a very actual topic don’t you think?