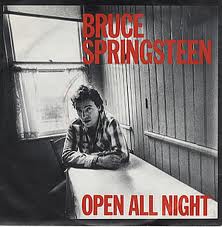 Open All Night was one of the first song written as part of the album Nebraksa in 1980.

The song talks about a particular “situation” that happened in the life of the singer when he was driving on the New Jersey Turnpike highway going back to his girlfriend’s place.

Suddenly he was stopped by a police car because he was going too fast; the two policemen asked him his documents, but he didn’t had with him his wallet.

Despite the fact that he was recognised by one of them, they brought him back to the police station where he had to face a judge.

That night he couldn’t reach his girl…..