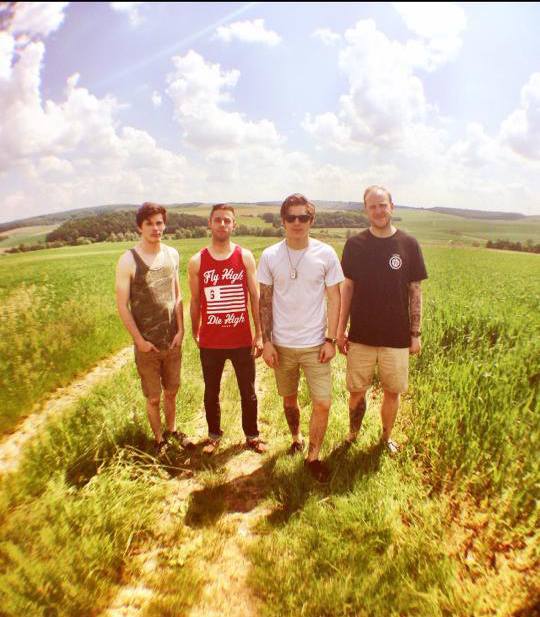 A new EP is set to be released in November while a massive USA tour is going on…. you should not miss this interview with Trevor of Our Last Night.

If you don’t know them yet (shame on you 🙂 ), please visit their website @ http://ourlastnightband.tumblr.com

RYL: You guys are touring USA, how is it going so far? How is the response from the your fans?

Our Last Night: Touring in the US is always a blast, we’ve done so many tours here that we’ve built up a very dedicated and loving fan base that always supports us every show. We’ve also been seeing a lot more kids coming out to the shows due to the covers we’ve been posting on YouTube.

RYL: Which song is your favourite when you play live?

Our Last Night: I definitely have a few favorites to play live, but I think as band we could all agree on the song “Fate” being our favourite live. Its the song we usually open the set up with, and usually a crowd favourite. Either that, or “Reason To Love”

RYL: If you go back with the memory, in the last three years, which was your greatest gig so far? Maybe Warped?

Our Last Night:: My favourite show honestly I’ve ever played was the London show on our most recent UK tour w/ Sleeping With Sirens. It was sold out at like 1,500 kids. They were all screaming like crazy, singing along to all the words, and after the show I got to hang at our merch table and talk with a lot of them/take pictures. Definitely my favourite.

RYL: One year ago you released “The age of ignorance” your third album, we listened to it and we want definitively more! When you will release a new one?

Our Last Night: Thanks! Glad you guys like it. We are actually currently recording right now and plan to have an EP out in early November.

RYL: The song “Fate” is indeed the one that got more success than the other, why in your opinion?

Our Last Night: Well we decided to make “Fate” the first single off the record, mainly because it had that school OLN feel to it that all our fans love, but also had a mix of the new sound we were going for. I also think people can relate a lot with the lyrics which is always a big part of songwriting.

RYL: Do you remember how you wrote it?

Our Last Night: Just started off with an idea, and wrote it into a full song. I think we may have actually started writing the song based around the strings at the beginning of the song.

RYL: We personally like “Liberate Me”, it is almost a metal song…. Very different than the rest of the album, can you dig on the meaning of the final verse “I said “You’ll never take my freedom away, and those were the words that made us separate”?

Our Last Night: Thank you. Yeah thats another personal favorite of mine. Some people arent completely sure what I wrote this song about, because it can be interpreted in many different ways. But its really written about an ex girlfriend of mine. That line in a simpler meaning, is me telling her that she is too controlling and that I needed more freedom, but in her eyes me telling her I wanted more freedom and space, is me telling her we are breaking up.

RYL: A month a go you released a cover of “Mirrors” of Justin Timberlake, why you select this song? What does it mean for you?

Our Last Night: It was just a personal favourite of all of ours, so we wanted to cover it in our own heavier rock version

RYL: We absolutely love your version of “Skyfall” that one definitively rocks!

Our Last Night: Thanks.

RYL: What do you think the music industry should do to incentive new bands to create new music? Which do you think is your role in making it happen?

Our Last Night: The music industry is in a tough era right now. Bands should always want to create music and release it to their fans, If I can say one thing to all bands though, it would be to do it yourself, try and release your music on your own and use the internet (Twitter, YouTube, Facebook) as your  “Label” the internet is everything now, YouTube is pretty much the new radio. Just be creative and don’t be scared to try something new.