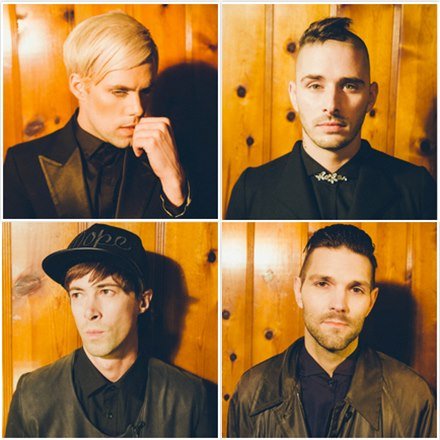 Own It, Live It, Love It, interview with Semi Precious Weapons

At the end of their tour with Ke$ha, Semi Precious Weapons (http://www.semipreciousweapons.com) are preparing themselves on their next challenge, the release of the new album.

Justin, singer of the band, answered to our questions about their lyrics, future projects and a career between New York and Los Angeles…..

RYL: You recently released the new single “Aviation High”, how was the response of your fans? Happy about the success it obtained?

SPW: The response was amazing. It was wonderful to see people getting excited over the song as a whole and not just some fabulous one liner I sang.

RYL:  In its lyrics you are talking about a story of love…this song was inspired by something that happened in your life?

SPW: Oh yes. I wrote it during that magical stage of when I was first falling in love with someone. Whether we were deep in conversation or deep in something else, everything we did together made me feel high.

RYL: Last album released by the band was “You Love You” in 2010; now, three years, later, you are preparing the release of a new one; would you tell us more about it? What your fans should expect?

SPW: Well first we would like to say that we are very sorry it’s taken so song long to get the music out. We have been in record label hell but that is all over now. People should expect songs that we as a band love and feel fucking great about. The sound has for sure evolved, but it’s just about us trying to create something that excites us as artists and serves the songs.

RYL: Our website explores the stories behind the lyrics, how do you usually write your songs? How important is giving a meaning to them?

SPW: I’m just trying to tell my story as honestly as possible. If it’s not real to me in some way there is no point to even write it as far as I’m concerned.

RYL: “Rock and Roll never looked so beautiful” is one of our favorite songs of that album…you start a journey with your high heels walking over a bridge and you end up with your ashes mixed with diamonds…. But the party must not stop….why that?

SPW: That song was like my fantasy ode to NYC. How New York inspired me at the time, and how I hoped that I would help inspire it. Obviously I didn’t want the romanticized glamour of New York to die even after I left it. So even though I’m gone, the party better keep going.

RYL: Glamour and Rock and Roll, what is important in the life of a (glamorous) Rockstar?

SPW: Glamour comes in many forms. It’s all being being glamorous for who you are. I am a guy in a rock band that likes heels and makeup. That’s my version of glamour. But Kurt Cobain was glamorous in his way too. Own it, live it, love it.

RYL: The energy that you transmit to people during your live shows is just great, we remember your performance @ the Sunset Strip Music Festival, but also @ The Sayers club in LA…, now you are currently in tour Ke$ha, how is going so far?

SPW: Well thank you very much. The tour with Ke$ha is over now but it was fucking unreal. Such amazing fans, great small cities, and K$ and her whole touring posse are wonderful people.

RYL: Among all the songs you wrote which one is the most dear to you and why?

SPW: Wow…hmmm…well Leave Your Pretty To Me will always have a special place for me because it’s about my dear friend Jocelyn, and a amazing moment we had in our friendship. But I’m also really in love with a song called “I Hope You Were Healed” on the new album as well. It’s all about how I had this unreal connection with someone who abruptly disappeared for a while.

RYL: What inspired the lyrics of “Statues of Ourselves” ?

SPW: Its all about this party Lady Starlight was throwing in Brooklyn every Thursday night. No one would go except our 5 best friends, and it was the best party every single week. The essence of the song is just loving the world you and your friends create so much that you wanna build statues about it.

SPW: Los Angeles for now. New York has gotten so expensive that it’s really hard to live there unless you are a millionaire, which isn’t helpful if you’re trying to make music and art. But NYC made SPW what it is, so it’s really hard to say that, but I think it’s true.