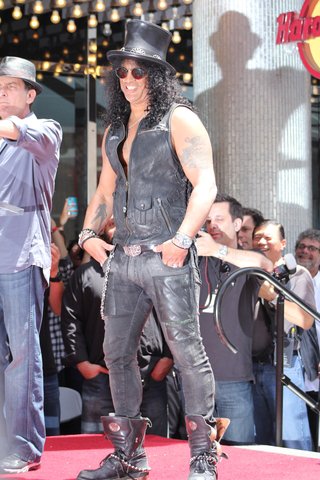 Do you prefer the Axl or Slash Version?

The song is anyway amazing, how many times you find yourself singing it loud while you drive home from an hard day at work ( oh my god! that’s me…..)

It all starts when, Slash (in the picture), started to write the song  in the back of a rental van as they were on their way back from playing a gig in San Francisco with the band Rock N Riders.

He says that the band was in the back of the van, drinking and playing acoustic guitars, when he came up with the intro.

Duff McKagan and Izzy Stradlin started playing along. Slash started humming a melody when Axl Rose sang, “Take me down to the Paradise City.”

Axl finished with “Take … me … home!” Slash preferred his second line but the rest of the band felt differently. He was outvoted and they used the first line. The band then expanded upon the rest of the lyrics in rounds. Finally Slash wrapped up by coming up with the heavy riff that drives the song.**

During a 1988 interview, Rose told Hit Parader magazine that “the verses are more about being in the jungle; the chorus is like being back in the Midwest or somewhere”.

This article uses material from the Wikipedia article <a href=”http://en.wikipedia.org/wiki/Paradise_City , which is released under the <a href=”http://creativecommons.org/licenses/by-sa/3.0/“>Creative Commons Attribution-Share-Alike License 3.0</a>.