Did you know that the sign of Penny Lane has been stolen so many times that the municipality of Liverpool decided to “draw” the sign in to the wall?

Another sign on how big is the BeatlesMania….Penny Lane is the place where everything started, where Paul McCartney and John Lennon met the first time and where they were taking the bus every morning in order to go to school.

It has been written in 1967 and his part of the album and soundtrack “Magical Mystery Tour”.

The lyrics of the song are describing the Liverpool of that time, from the shelter (used by young couples to “enjoy”) to the fire station, from the barber (famous for cutting the hair of John and Paul) to the banker.

The song was released together with another single “strawberry fields forever “ and rapidly became a hit, in USA, strangerly enough, more than in UK. 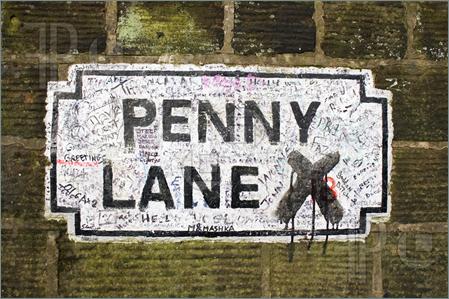 In fact, in USA it reached number 1 poistion in the chart while in UK only number 2.

Penny Lane today , despite being a very famous touristic place is still an area of Liverpool, is a place that still needs development; the old shelter, in the roundabout, became a bar but it was closed and now is there with no life…..

It is a good business idea….anybody interested to buy?