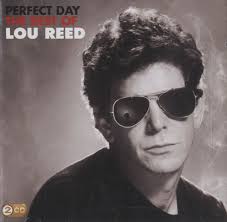 “Trainspotting”; reading back in the articles of our website we can understand the importance that this movie had in bringing back to glory successes from the past.

It happened with Lust for Life of Iggy Pop and,as well, with the today’s song: “Perfect Day” of Lou Reed.

In fact, this song, has been written in the period after the departure of the singer from the group Velvet Underground; the year is 1972 and the album was titled “Transformer” (produced by David Bowie and Mick Ronson).

Many interpretation for its lyrics; the first one is that Lou was thinking about the time spent with his first wife Bettye Kronstadt in a park, at the movie theatre, the second interpretation (supported by many and maybe reason why the song was selected for Trainspotting) is referring to Reed’s problems of drug use, and sexuality.

It seems that the lady was not his soon to become wife, but instead, the heroin that, during these years was protagonist in the Lou’s life.

It is true that, if we consider the lyrics-production of Lou Reed, the themes of drug and sex are often protagonists……

Lou never really confirmed which version is the right one…have a look at the video and tell us? Which is the one you choose?