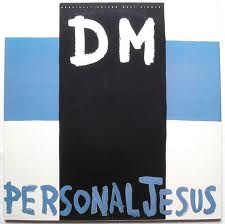 Personal Jesus is one of the most successful song of Depeche Mode, it reached a peak positions in many music charts across the world.

The year is 1989 and it was written by Martin Gore, guitarist and singer of the band.

Apparently the song was inspired by a book…..”Elvis and Me” by Priscilla Presley, former wife of the rock and roll legend.

Elvis for her was not only love, he was a mentor, a guide….in few words….a Jesus that, as the verses of the song are saying: someone that cares, someone that is there and forgives.

I guess we all have a personal Jesus in our lives, don’t you agree?

By the way, we love the way the song was promoted in UK…… in all newspapers appeared a black page with written ” Your Own Personal Jesus” and a phone number…….. if you were calling it then you could have listened to the song …….genial!