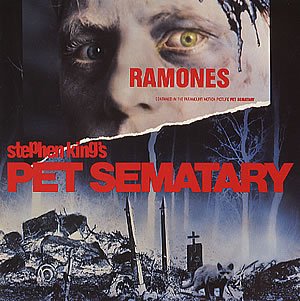 Directly from the album “Brain Drain” of 1989, Pet Sematary is one of the successes of great New York based band Ramones.

The title of the album would have come from a phrase of the bassist of the band Dee Dee that said that, in that period, everybody in the band had huge problems that were affecting their brain as well.

Its lyrics have been written by Dee Dee Ramone together with the music producer Daniel Ray….one of the last song written by DD before leaving the band at the end of the album’s preparation.

The song has been written as a soundtrack of the horror movie, directed by Marie Lambert, that carries the same name of a novel of  Stephen King.

Apparently Stephen was a big fan of the band and wanted “Sheena is a punk rocker” and “Pet Sematary” in the same soundtrack.

The song obviously is inspired by the movie and talks about a nocturne visit to this pet sematary where weird stuff are happening….