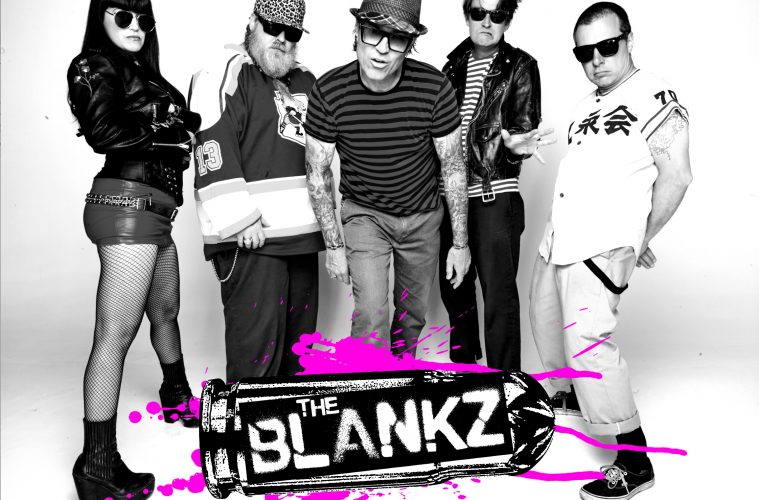 rockyourlyricsMay 4, 20180 views
News0 views 03 min read
Slope Records announces the debut 7-inch by newly formed Phoenix punk band The Blankz. The band will release a series of nine 7-inches culminating in a full length compilation of all the releases at the end of this year. The first single features the title track “White Baby” backed with “Sissy Glue.” Available formats will include CD, 7-inch vinyl, cassette and digital download.
The band delivers infectious synth-driven punk rock with new wave elements and wears their influences like a badge of honor: The Ramones, Devo, The Spits. The Blankz are Tommy Blank on vocals, Jaime Blank on guitar, Nikki Blank (The Darts) on synthesizer, Andy Blank on bass and Johnny Blank on drums.
What started as a casual writing project between band founders Tommy and Jaime quickly became something more as they realized they had real chemistry and shared a vision for the band. ‘”Jaime and I agreed from the start that we want this to be a fun band with snotty lyrics,” says Tommy Blank. “There are passing mentions of drugs and partying (though I am 13 years sober) and a few non-P.C. lyrics, but The Blankz have no interest in political rants or agendas.“ 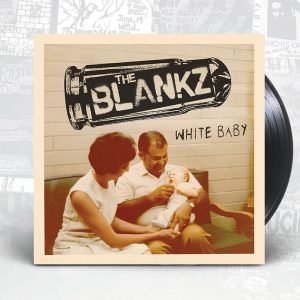 Cris Kirkwood (Meat Puppets) produced the first two sessions, which include their debut as well as the upcoming single featuring “(I Just Want To) Slam!” backed with “Baby’s Turning Blue.” The title track from the first record in the series, “White Baby” is about Tommy Blank. He was in fact a ‘white baby’ adopted by Mexican parents in 1969. Cultural dissonance permeated his youth. He recounts “I constantly found myself navigating situations that were either culturally Mexican or “white” and having to figure out where I belonged in that dynamic. The punk scene provided a home-away-from-home for me. It was a place to feel ‘normal’ since the scene is all freaks, deviants and social misfits.“
Jack Rabid at Big Takeover Magazine wrote about the songs, opining “This is great 1977 stuff, like L.A.’s Skulls and Zeroes, S.F.’s Crime and Negative Trend, or eventual Orange County crashers Social Distortion, Crowd, and CH3. (Femme Nikki Blank’s sci-fi organ on “White Baby” and the quicker, X-esque flipside, “Sissy Glue,” is more like Akron’s Devo.)…Tommy Blank’s exuberant vocals, and lyrics’ weighing his modern racial identity—a white kid raised by Mexicans—show smarts.“
Album artwork was rendered by Dana Armstrong with layout by Mike Fisher and band photos were shot by longtime friend, Joe Cultice. Visit the band on Facebook, Bandcamp and Instagram.
ABOUT SLOPE RECORDS
Slope Records is a Phoenix, Arizona based (mainly) vinyl record label founded in 2015. Started by Phoenix native, Thomas Lopez, the label caters to fans and collectors of first-wave punk as well as contemporary hardcore, garage, psych, and rock ‘n’ roll acts. All records are pressed on highest quality vinyl and the packaging is designed with vinyl aficionados in mind. In addition to their commitment to quality, the label is dedicated to tirelessly promoting the music they love and curating the history of the scene that made Slope possible in the first place. Slope Records are purveyors of independent disruptive punk rock with releases by artists such as the Exterminators, Feederz, The Bulemics, Fuckemos, The Father Figures, Cocky Bitches, The Linecutters and many others.
The label is distributed by Independent Label Distribution. Radio promotion is handled in-house.