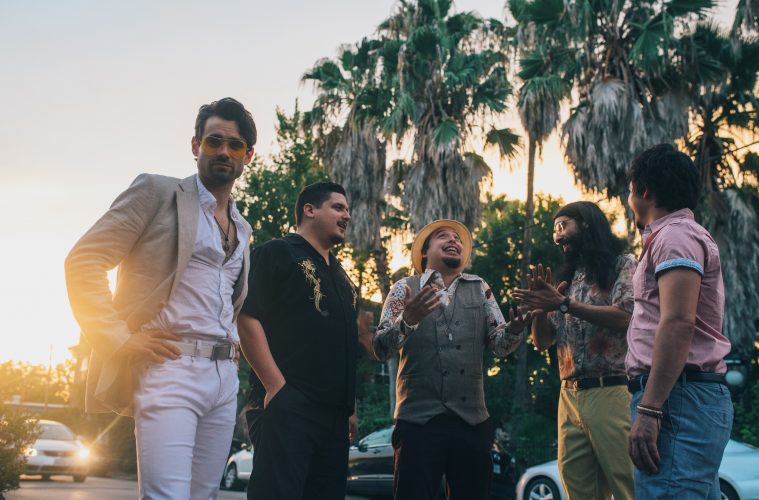 With my eyes closed. On a deserted beach on a remote island of my mind. Ha, kidding.

That process is always changing. When I was younger, the game used to be all about a sort of word impressionism. I wrote phrases and sentences that didn’t necessarily tell a narrative story, but more just rhyme well and revolve around a vague topic. That style fit our early, funky, rhythm-centric music, but began to feel lazy for me.

It was a challenge to try and write about more specific topics, but it’s been massively rewarding. I feel that a tasteful amount of specificity in lyrics actually makes songs more personal, interesting – and most importantly — vivid. That being said, I still always try and leave a lot of room for interpretation, instead of telling the listener an exact account of a story.

I’d say the most important thing in songwriting is being able to insert visual images into a listener’s mind. The songs I love the most have a very specific visual look when I close my eyes. Although that visual space isn’t super exact. It’s like when you are dreaming, and you know the scenery you’re occupying is a familiar space (let’s say your bedroom, for instance), but the dimensions aren’t exact.

Also, having a narrator who is distinctly his or herself is super important. Amy Winehouse and Alex Turner are two of my absolute favorite lyricists.

I always compare Amy to Jimi Hendrix. They were both so supremely talented on their respective instruments, that the music that came out of them was able to flow with complete freedom. They seemingly had zero thought about what they were playing (or in Amy’s case, singing), as it was just so natural.

Amy used to write her lyrics basically on the spot in the studio. In one interview, she says completely straight faced that she writes all her lyrics in a few minutes, and that “I know what I want to talk about, I’m not an idiot.” This is of course, a hilarious over-simplification of just how difficult it is to write lyrics in your own voice, that a literal genius just can’t relate to, in her case. When she sang, through all the jazzy melody and vocal trills, it always sounded like she was just talking to you. Her lyrics were biting, funny, raw and emotional..and she did it all with such ease.

Alex is a poet in the most traditional sense of the word. His turns of phrase and use of vocabulary is like no one else. His descriptions of bar hopping in Cornerstone or when he says “Call of the search for your soul, or put it on hold again” immediately put me in a very specific physical space in my mind…..as if he were implanting his own memories (or memories that are completely made up) into my imagination.

His lyrics make me nostalgic for things that didn’t even happen to me.

You always hear that phrase “the best art is vulnerable art,” and many of the most powerful songwriters bare their soul in some way or another with their lyrics. I’ve tried to work from this angle, but eventually found that it’s just not that motivating for me.

I used to be self-conscious about that and wondered if I could ever be a truly great songwriter without having some significant and specific struggle to bare. But honestly, I don’t write songs to cope with issues in my life and I have other ways of dealing with them that are way more effective for me, like talking with my inner circle of loved ones. Or violently pacing back and forth for hours. I’m not saying I’ve never written from that place, or that I won’t do it in the future, but it’s not what moves me at the current time.

What I prefer to do is try to send people into that physical space, or put them into the mind of a character or movie…or something like that. Hopefully I’m becoming more effective with that. I think I’ve really turned a corner with our newest batch of music. I still have lightyears to go.

Sometimes it can be tricky writing lyrics for a funky pop band. Being overly thoughtful or metaphorical can actually distract from the goal of entertaining people, depending on the song.

There are just so many classics to choose from. HA! Kidding, again. Honestly, I’m only just starting to write songs where I sincerely like the lyrics throughout the song. I really dig the lyrics for “Get 2 Sleep” and feel like they cut a pretty relatable picture of hopefully a not-so-relatable character. Here’s the 2nd verse:

“Go through my phone, try my luck

I know it’s been a couple years, I figured I should hit you up

Happy 4am, I got some tree, let’s grab a drink

Honey, why aren’t you answering me, what do you think?”

Pretty douchey and clueless, eh? Then again, sleep deprivation and loneliness can drive people to some pretty embarrassing situations.

What inspired “Playboi”, your latest single?

We were watching a bunch of heist movies at the time, and were getting into some crimey-noir themes. I had been dying to make songs with more simple rhythm parts…more 90s hip-hop inspired. So I made this beat and freestyled melodies and lyrics over it while driving around my neighborhood for hours. The movement of the car helps sort of stabilize part of my brain and prevent it from wandering, which enables me to sort of trance-out and jam the thing on an infinite loop, like a psychopath. Same concept works with writing in the shower or on a plane, with all the white noise from the AC. The lyric “Plaaayyyboi” just came out of nowhere, and I loved the way it sounded, so I built the lyrics around that. This shady, narcissistic playboi character was the jump off both for the song, and then a few more that have come up since then.

We made this song collectively while jamming in our studio. This used to be pretty much the only way we made songs when the band first started, but now we don’t have time to do that so much anymore. Prepping for shows and money shows (less desirable gigs that pay a decent guarantee so we can keep putting money into the band) and juggling day jobs and multiple girlfriends (ha, kidding again…just one for each) makes it difficult to find time to just straight up jam. So we bring in half or fully finished songs individually and then collaborate as a band with them.

It was so exciting, having that moment of instant collaboration, and hearing that this song was basically finished right when we started it. I freestyled the chorus on the spot – melody, lyrics and everything: “Darling, don’t keep on calling me, 6 in the morning, I just got to bed.” I built it around that sentence and added some woozy, psychedelic elements that reflected the sonic texture of the instrumental.

Besides working on more new songs and playing money shows to fundraise for our future plans, we are going to be preparing for a huge 2019 that will include much more national touring than ever. We’ll definitely be releasing more music soon, although I don’t know if that will be late 2018 or early 2019.

We do take donations, people.