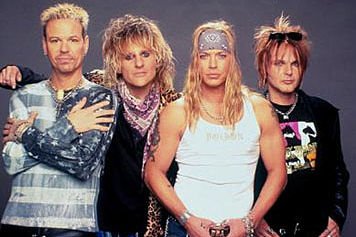 Straight from the glam scene of Hair Metal of Los Angeles California: The Poison (http://www.poisonweb.com)

Their career started in 1983 in Pennsylvania and was founded by  lead vocalist Bret Michaels, guitarist Matt Smith (later replaced by CC Deville due to Smith departure from the band), bassist Bobby Dall, and drummer Rikki Rockett.

Did you know that Slash had an audition with Poison before joining Guns and Roses? Cool isn’t?

Their motto : “Work hard, play hard” helped them in reaching a large audience especially due to their endless tours across the world.

Poison had , during the years, an incredible success of public and sales with over 30 million copies sold; today they are still touring and apparently preparing a new studio album , the 9th of their career (last album poison’d has been released back in 2007)

Among their most important successes : Every Rose has its thorn, Falling Angel, Ride the Wind, Something to believe in, Unskinny Bop and many more…