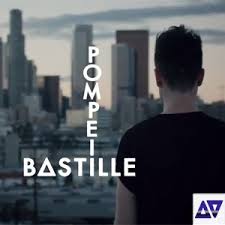 Pompeii is the fourth single released from the first album of Bastille, a band that has its own origins in London.

It has been formed three years ago in 2010 by Dan Smith,Will Farquarson,Kyle Simmons and Chris Wood.

Their first album “Bad Blood” was released in march this year and obtained a large success, especially after the release of Pompeii.

The title of the song refers to the city located in the south of Italy near Naples that was destroyed by the eruption of the vulcan Vesuvius in the year 79 AD.

Like in this city covered by ashes, the verses of the song describe the imminent end of it….the clouds that are approaching…. the walls that are going down…

It is our opinion that the lyrics could also describe the end of a love story and the willingness to “be optimistic” while everything collapses around them.