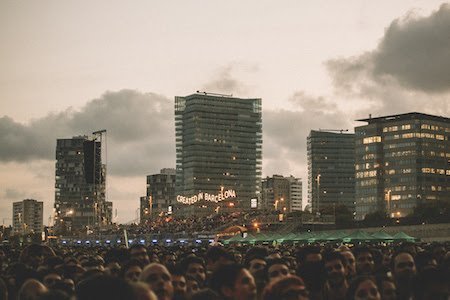 The new edition of the Barcelona festival starts today, in a year at which Saturday 1st June will break all attendance records

In parallel, Primavera Pro will celebrate from Wednesday on in the CCCB ten years of meetings of music professionals

If you are going to blink, do it now. Because the nineteenth edition of Primavera Sound officially takes off today with the concert by the Barcelona quintet Kelly Kapøwsky in the Apolo of Barcelona and will not end until the early hours of Monday 3rd June, when DJ Coco will put the finishing touches to the festival in that same venue. That will also be the starting point of the journey that will take us to the twentieth anniversary of the festival. But before, many, many things will happen. Things that don’t happen at any other festival in the world and that you have to experience to understand why Primavera Sound is a rarity. An anomaly. An exception. If you are going to blink, do it now because this year there is more Primavera Sound than ever.

There are 295 artists who will give 331 performances during the course of the week. They will come from 40 different countries, and each from their own way of understanding music. It can be the theatrical exuberance of Janelle Monáe or the minimalism of Terry Riley & Gyan Riley. Rico Nasty’s unadulterated trap or Big Thief’s all-enveloping folk. The in-your-face stage show of the Japanese artists Chai or the scientific precision of Apparat. The four drum kits of Sons of Kemet XL. J Balvin as the international icon of Latin music. The Messthetics featuring two members of Fugazi. Stereolab’s comeback. Solange. Shellac, always Shellac. Nina Kraviz. DJ Playero. Miley Cyrus. Él Mató a un Policía Motorizado with J of Los Planetas, Amaia and Manu Ferrón. Rosalía back to her hometown after conquering the world from Barcelona. Jarvis Cocker with a new spectacle and as a DJ. Tame Impala. DJ Rosario & Sama Yax, our two in-house DJs closing the Ray-Ban stage on Saturday night. We could go on, and on and on, but each member of the audience will definitely find one of those special moments that cannot be quantified. At Primavera Sound there are always many things that stray from the norm.

There will be a record attendance. Having increased the daily capacity in the Parc del Fòrum to 64,500 people per day, organizers can now confirm that Saturday 1st June will be the day with the largest audience in history of Primavera Sound. Although the sales figures for the last few days are yet to be known, the forecast is that the attendance will also grow in terms of absolute value and that the appeal of the festival to new audiences will be confirmed without forgetting the generation that has grown up with Primavera Sound. On that day, without any doubt, we will have lots to celebrate… so keep your eyes (and ears) wide open. 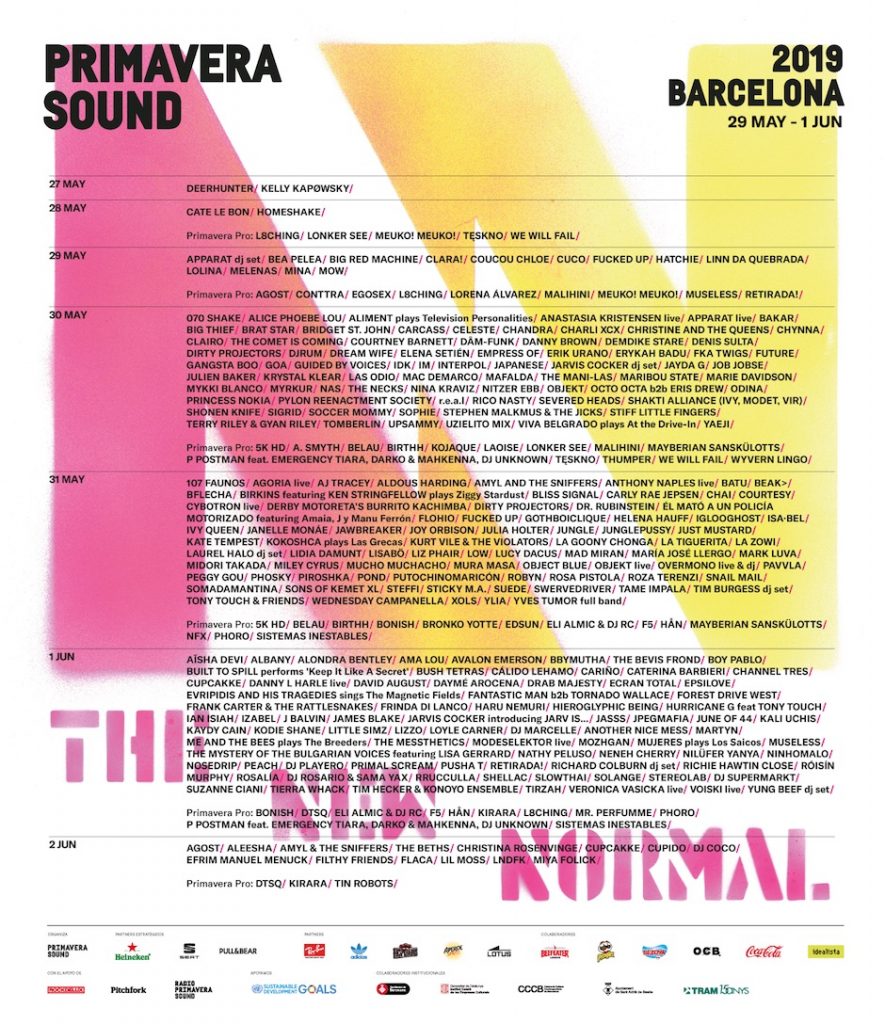 There are 22 stages. 17 of them at Parc del Fòrum and 5 more spread out around Primavera a la Ciutat. In the main venue we present El Punto by adidas Originals, a space that looks like a street football pitch curated by Yung Beef, along with Your Heineken Stage with its homage to authentic fans, Seat Village Stage with its unequivocal commitment to hip hop and OCB Paper Sessions with intimate concerts surrounded by water. Without forgetting Abaixadors10 in the city centre, that apart from being home to Radio Primavera Sound this year will host three free concerts by Cuco, Hatchie and Tirzah thanks to Living Primavera by IKEA.

There is more than gender equality. With so many numbers, numbers stop making sense… but here they are: The New Normal is, amongst other things, the fact that 50.77% of the artists in the lineup of a festival of the calibre of Primavera Sound are female. 41.92% are men, 6.53% are mixed projects and 0.76% define themselves as non-binary. Let’s hope that from now on it won’t be necessary to highlight such things.

There are over 6000 people involved. Production, bars, information, cleaning, artists, technicians, logistics, security, transport… Thousands of people working so that the festival is smooth, safe and as much fun as possible. Without all of them, Primavera Sound would not exist.

There is commitment. With the 17 UN Sustainable Development Goals, that Primavera Sound has subscribed to in an agreement that aims to fight for better festival and a better world. With Nobody is Normal, the new project to flag up and look into to any incidents of gender violence and harassment to which people who defy gender norms are exposed. With Primavera Sound’s actions of Corporate Social Responsibility, which this year include, for the first time, reusable cups (another aspect to keep a close eye on) and that consolidates its collaborations with Formació i Treball, the Food Bank and Save The Children, among other organisations.

There is much more than music. So many things are going to happen around music during the week such as the new edition of Primmmavera, the gastronomic lineup of the festival that as this year’s novelty will present a gourmet bar with the collaboration of Josper and the Go Beach Restaurant, as well as an international culinary proposal brought by the restaurants of the city and food trucks of all types. You will be surprised by the new rambla at the entrance of the festival presented by Pull&Bear, as well as by the area of the two main stages which is now green and by the fact that a fortunate few will live the festival from the inside, in the Casa Ikea installed in the Primavera Bits area. Primavera Sound is also an experience.

There will be hours and hours of streaming. Thanks to Radio Primavera Sound, Primavera Sound will be seen and heard all around the world in two ways: an audio-visual broadcast in which it will be possible to see whole concerts, interviews with artists and other exclusive content; and in digital radio format that will explain from the Parc del Fòrum everything that is going on in real time with the protagonists. More details soon.

In short, Primavera Sound 2019 goes way beyond The New Normal. The most talked about concept about the festival in the last few months. The gender equality, the urban, the commitment. But what does it matter what The New Normal means? The dice have been thrown, so that’s enough of words, slogans, and debates. This is the moment to get onto the playing field, to make the proclamations reality, to form an opinion and, above all, to enjoy the simple and fantastic brilliance that is Primavera Sound.

At Primavera Sound there is also cultural debate. In 2010, Primavera Pro organised for the very first time a handful of discussions by the sea, an unconventional setting to launch a professional meeting. After nine years and several changes of location, the meeting point for the music sector reaches its tenth edition having multiplied the number of activities and attendees whilst still maintaining its heterodox character, which is embodied in a programme that goes beyond the industry, and even beyond the strictly musical, to embrace cultural debate in the widest sense of the term.

This is the spirit from which Insumisas rises, a section organised in collaboration with the association Mujeres de la Industria de la Música that joins the core programme of the meeting, proposing debates on the political dimension of feminism, at which rappers, DJs, activists, writers and journalists, including Rebeca Lane, Brigitte Vasallo, Remedios Zafra and Lucía Lijtmaer will participate.

At the three days of Primavera Pro at the CCCB, between the 29th and the 31st May, there will be other activities that go beyond the normal boundaries. For example, the session led by Stephen Malkmus, who has prepared a selection of his favourite musical moments in the history of cinema (and beyond), allowing us to discover the surprising cinephilia of this indie rock icon. Just as revealing will be the interview with Neneh Cherry, who will talk about her unpredictable artistic career and who will receive the Primavera Award through which the festival recognises her status as a pioneer when it comes to opening up paths for the new normality in the world of music.

For their part, Fermín Muguruza and the sociologist Iki Yos Nárvaez will participate in a roundtable discussion about one of the most preoccupying questions that has come up in the music environment recently: cultural identity in music, and what paths an artist takes when they have recourse to sounds coming from distant folklores. “Tradition”, “fusion” and “modernity” are words that will, very probably, pop up in this discussion that is open to the public, and will be transformed into rhythm thanks to the workshop of Candombe given by the Uruguayan band F5, who will also perform in the international showcases that Primavera Pro organise in the Pati de les Dones del CCCB and in the Parc del Fòrum.