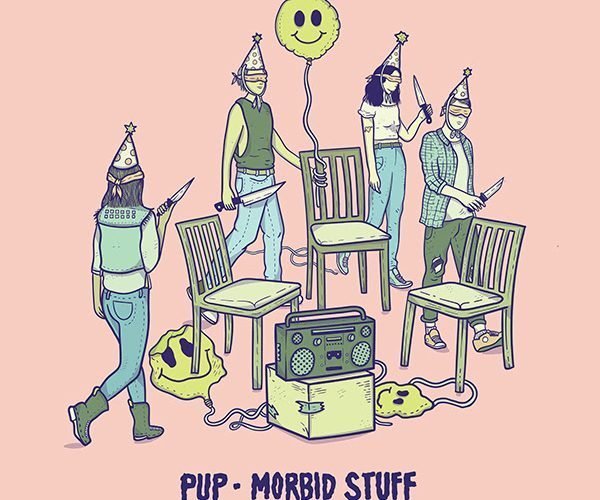 Toronto, Ontario’s very own punk powerhouse — PUP — will release their excellent new record ‘Morbid Stuff‘ in April, and the band shares not one but TWO new amazing songs from the album — “Sibling Rivalry” and “Scorpion Hill.” “Sibling Rivalry” is a song for Stefan’s sister and their annual disaster-filled camping trips, and the epic “Scorpion Hill,” which Stefan says is “about embracing your demons and finding some humour in the darkness,” is the longest PUP song ever released, with an accordion outro to boot.

PUP also made their late night television debut this week, performing the hell out of ‘Morbid Stuff’s’ lead single, “Kids,” on Late Night with Seth Meyers.

This Spring, PUP will embark on a North America, UK and Europe tour in support of ‘Morbid Stuff’. CHECK OUT THE DATES BELOW!

Formed in Toronto five years ago, PUP — comprised of Stefan Babcock, Nestor Chumak, Zack Mykula, and Steve Sladowski — quickly became favorites of the punk scene with their first two, critically-beloved albums, winning accolades everywhere in the press. Now, with ‘Morbid Stuff’, PUP have grown up and doubled down on everything that made you love their first two records. It’s gang’s-all-here vocals, guitarmonies, and lyrics about death. Lots of them. Fitting to their ethos, their new album takes the dichotomy of fun and emotional wreckage in their songs and teeters between gleeful chaos and bleak oblivion while wielding some of the best choruses the band has ever written. It’s the most insightful, sweetest, funniest, sickest, angriest, saddest and most inescapably desperate collection of songs they’ve recorded to date.  If their self-titled record was the fuse and ‘The Dream Is Over‘ was the bomb going off, ‘Morbid Stuff’ is your family sifting through the rubble, only to find you giggling while you bleed to death. 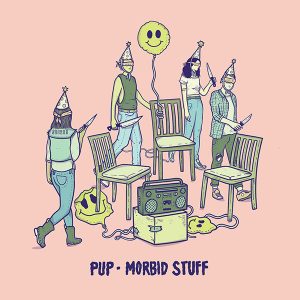