“I hate myself and I want to die” this was supposed to be the title of the album released, exactly twenty years ago, (1993) by Nirvana.

It wasn’t only that, it was also the reply that Kurt Cobain was giving to everybody when they were asking him how he was.

Obviously it wasn’t easy to title an album like that; Nirvana opted then for a title of a poem of the wife of Kurt, Courtney…. “In the Utero”.

Unofficial sources are saying that the album reached already 8.000.000 copies sold in the world.

The song “Rape Me” has been written in 1991, at the time of “Nevermind” by Kurt, while the title sounds horrible, his intention were different….it is like he was saying you can do everything you want to me, you can rape me, but I will survive, I will not give up and then…..you will burn for what you have done.

Other sources said that these lyrics were related to drug abuse or the problems that Kurt had with journalists that were interfering with his private life.

Do you want to know a crazy episode? Nirvana was invited at the MTV music awards but was prohibited to sing “rape me”  and asked to play “lithium” instead.

When the cameras were ready and the lights on LIVE in front of millions of viewers, Kurt started to sing: Rape Me!!

MTV executives went totally crazy and they wanted to cut the song while Kurt quickly changed in to Lithium lyrics……so they could finish their performance. 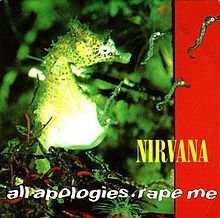