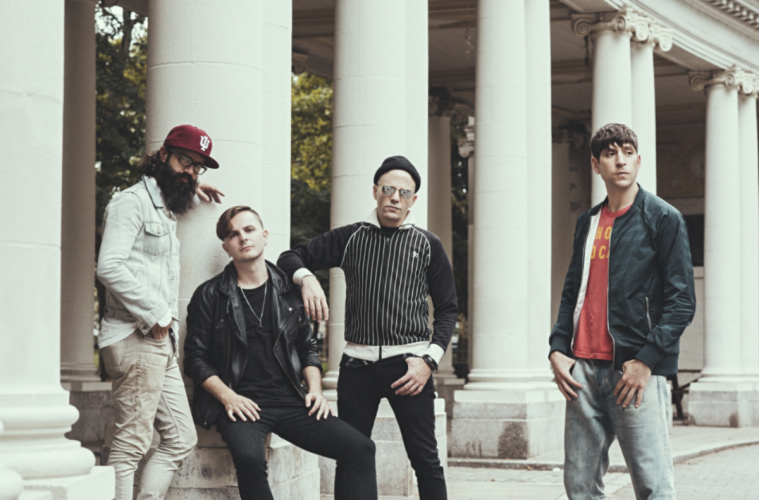 We have a simple rule: if it makes you laugh, it stays. This doesn’t mean our lyrics are trying to be funny, it’s just a matter of looking at each other and saying ‘this is working’ because it’s getting an automatic reaction. I tend to work pretty fast and I like to chase the wildest options on the table, so there’s always that ruthless spontaneity. But we also spend a lot of time locking down details. So even when the core ideas and cadences and rhymes are all clicking out of the gate, there’s often a round of tweaks focused on trimming the fat and nerding out over the best possible prepositions and conjunctions.

I’m very open online and comfortable talking about what I’m doing or what the band is up to, so there’s no real fear in that sense. I’m content and confident and we’ve found that songs about that can be incredibly moving for people who don’t share that experience. But I also like to be the one finding out what it’s like for others through our music. It’s not always exciting to write about yourself and, honestly, positivity can be boring as fuck. I think channeling the world as it is, as it’s experienced by others, is necessary to make a real impact and, in many cases, much more challenging creatively.

On this record I would probably go with: “Everyone’s right, when nobody thinks anyone’s right.”

What inspired “HYDR8″, part of your latest album “Reborn Yesterday”?

‘HYDR8‘ was one of those songs where the sound of the music really dictated the lyrics. We had this horn part that was full-on crocodile skin street swag and we knew it had to be a fun one. Bruno Mars was on the brain because “Uptown Funk” was breaking records. We were probably drinking a lot because things were going great. Not in a dangerous way, more like celebrating all the time. I had started to focus more on fitness and the band was kind of undergoing a collective lifestyle change to adapt to touring so much. I’m not saying we set out to make a song about any of those things — we almost never have an end goal in mind when we start a song — but these were major elements of the world we were living in at the time. So I think we were sort of primed to connect those dots — partying and working out — when the opportunity presented itself. And, as always, we’re keeping our eyes open for ways to make ridiculousness work.

We had a major label deal. We were in L.A. in a fly ass corner house studio with brick walkways and gorgeous gardening. We had spent the week with big writers and producers. It was the last session before a guy with more Grammies than I have toes was going to mix the album. Let’s just say we were feeling ourselves.

Do you remember the day you wrote “Regular World”?

I have a vague memory of “Regular World” feeling like our first anthem; of being in the rehearsal space as we wrote it, thinking, ‘we don’t have to do quirky, out-there things, we can do soaring, feel-good things, too.‘ That was empowering. The core concept of wanting “to be someone” was more earnest and wholesome than what I’d personally written in the past. So, yeah, I remember it being different. But, ultimately, this song would become our first proper cowrite, so that day doesn’t tell the whole story. The band had a working version that captured the essence of what I’m describing, but it wasn’t until I linked up with Chris Chu from POP ETC at his Brooklyn apartment that the version we would eventually release came together. I remember that day pretty clearly because Chris had been someone who’d had success early in his career and who had been managed by an old friend of mine who passed away from cancer, so it was a real coming of age scenario for me, both in terms of doing a cowrite with someone I’d watched accomplish things I wanted to accomplish and in terms of it being ‘for our friend.’

The characters in these songs have a strong sense of self, whether it’s the unstoppable world leader in “JFK” or the comfortably down-and-out guy in “Karma.” We know who we are so the people in our songs do, too. That and risk-taking. Always be risk-taking.

Ricky Reed refused to use the terms “verse” and “chorus” when we worked on “JFK.” It was as if the entire framework for how pop music works was passé. With songs (and attention spans) getting shorter and shorter, everything has to be a hook now.

Promote “Painkiller” (our single), tour the country (30 shows in September-October-November), and then record the next record.