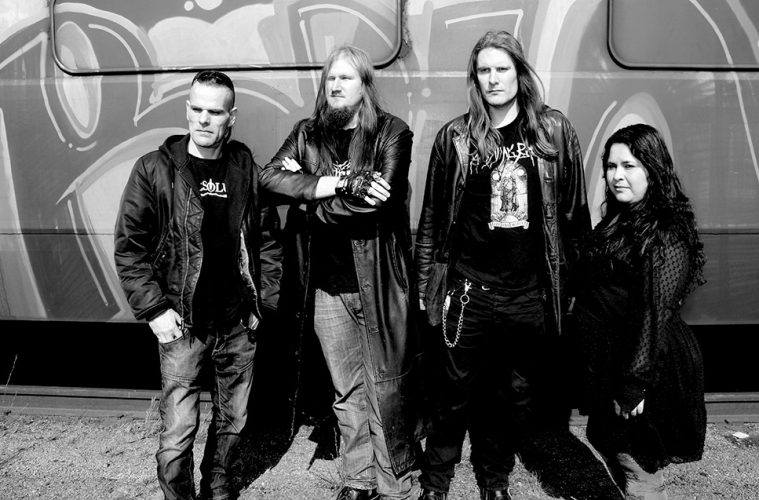 It varies. Sometimes the lyrics  comes first, and sometimes the song is “finished” already , and I either write lyrics for the song, or put lyrics afterwards and adjust it to the music. Many lyrics I have written have come to mind very naturally in an almost automatic flow, and I am not even sure myself what they are all about. The main part of the lyrics though, I write about a specific subject. I have written the lyrics for all songs released so far but Nadia has also written lyrics, for songs that are not released yet. Our new EP, “Rejection of Rejoice” has just been released, check it out! It is four tracks of 90s gothic doom metal and there are just a few copies left.

To create an emotion, it is absolutely the most important thing that the listener feel anything while listening to the song.

Yes, that is a good reason to write lyrics in English instead of Swedish, as a Swede it sounds less personal, even  though more people can understand it, but they are people you probably will never meet personally. I also often camouflage the meaning in poetic words, and ad some cryptic context. That forces the listener to think for themselves, sometimes to do their own interpretation. With that said, we also have lyrics that are more obvious.

“Fortitude”, the title track on our full-length album. It is about my mother’s struggle with her illness, and the sorrow I felt when she finally lost the battle. She was a very strong woman and fought hard! The second most meaningful is “Shroud of Melancholy”, initially meant to be a Desoluna song, that finally was recorded and released by my solo project, Shadowland. This song is about the mourning after her death, that I had  to go through at the same time as a series of other tragic events that happened in my life. It is also a tribute to her life. When you listen to these two songs, you can hear that they are not exactly happy tunes. “En olycka kommer sällan ensam” (an accident rarely comes alone) as we say in Sweden. I am also very fond of the lyrics  for “Diminished by Disgrace”, also from the Fortitude album. It is a bit more positive, to take control of your life and not be a robot in this brainwashing, emotionless, inhumane society. You don’t have to be a slave, if  you fight hard you can create something positive!

And “Rejection of Rejoice”?

“Rejection of Rejoice” is our brand new EP, but the songs are 10-23 years old! The title song, written in 1996 for my former band Desolate, is a song about standing up towards corrupt politicians. At the time Göran Persson was the finance minister in Sweden and he lowered the grants for secondary students from 750 to 640SEK a month. That made me very angry, since they saved money on the poor students. That inspired me to write this song that turned out to become more of a song about the French revolution or similar instead of Sweden. But in hindsight, that seems so innocent compared to what politicians do today!  But one thing is for sure: nothing changed, it is always the weak that have to pay for crises and for cutting down tax rates for the rich! The chorus goes “Dethrone the power that lies in the wrong hands”. The lyrics might sound exaggerated with gallows and everything but it is more like taking control over the politics, even if the song was written in 1996 that is more relevant today then every before.

“Lost in mind”, written in 1996 for Desolate,  is about a teenage boy who lost faith in life, btw this song is really inspired by 90s Paradise Lost, so a lot of lost stuff there.

Chill of summer is about climate disasters.

Night is about artificial people on the pub. Mind that I was a teenager back then, now I’m over 40. It was written for my first ever music cassette in my apartment project called “The Darkness Anthology” because I couldn’t find out a better name when I was 17.

Do you remember the day you wrote “Rejection of Rejoice”?

It was  in 1997 so I don’t remember the exact day. But I bet the sun was shining, haha! So why do we release songs that are over 20 years old you might think? Well, the songs where written for my first project “The Darkness Anthology” and “Desolate” that later became a band in the late 90s/early 2000s.  After Desolate I had a band called Clapatria that was a bit more symphonic, also initially meant to be a duo project. When Clapatria split up I started Desoluna as a solo project, as some form of new version of Desolate.  I didn’t want to have a band anymore because of all the problems but suddenly Desoluna also became a band after I met Nadia in 2013. And since most of  the Desolate songs have only been released with poor quality,  some only in cassette, we decided to re-record these songs, a long process that was filled with mishaps.

No, the lyrics are all about  different issues. One common thread is that they are about the dark/hard things in life.

The first producer was a pain in the ass. He boasted that he worked with this and this artist and that he was so good. But he couldn’t even create a decent sound and the sound of the drums really sounded like crap, so we of course didn’t take any suggestions from him. You couldn’t hear the bass drums, and I was prevented from using chorus and delay on my lead and clean guitars that I use as my trademarks. He also borrowed Olle’s car,  that stopped functioning after that. Later we heard he got abstinence from drugs. We were so unsatisfied that we re-recorded everything on our own and a friend of mine that said he wasn´t a producer, but in my opinion was very talented , did the mixing and mastering! Anyway, I can’t remember any suggestion from him, other than not to hire a producer without checking him or her references first!

To sell the last copies of “Rejection of Rejoice” that was released this year. Right now we are on hold because our bass player moved to Spain and the drummer lives as far as in Halmstad. And I became a dad, the most exciting thing that happened in my life! We had a small acoustic gig at Nadia’s wedding though. It was the first time we played Desoluna songs acoustic, with only an acoustic guitar and Nadia’s vocals, that was interesting. Olle, our drummer, also played with his new band Inställt.