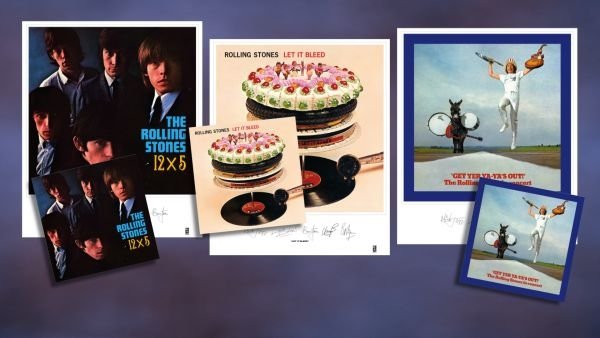 Only 2,500 of these hand-numbered and embossed museum-quality lithographs signed in the plate by Rolling Stones members will be available through a special license granted by ABKCO Music & Records, Inc.

These highly valuable collectible LP and lithograph sets, each with a Certificate of Authenticity, are available now at www.spotlightgallery.com on a first-come, first-served basis. The lithographs are printed on acid-free, 100# Opus dull cover stock measuring 20″ x 24″ with an image area of 16″ x 16.”

It should be noted that no additional copies will be produced after the initial press run is exhausted and the signature plates will be destroyed. The printing plates contain the facsimile signatures of the band’s personnel at the time each album was recorded: Mick Jagger, Keith Richards, Charlie Watts, Brian Jones and Bill Wyman on the 12 X 5 and Let It Bleed lithographs, and Jagger, Richards, Watts and Wyman on ‘Get Yer Ya-Ya’s Out!‘

Time Life will debut Spotlight Gallery and The Rolling Stones Clear Vinyl + Album Art Lithograph Collections with receptions in Los Angeles and New York. The Los Angeles event will be hosted by Chris Carter, heard weekly on Sirius XM’s Radio’s Chris Carter’s British Invasion and on KLOS. The event takes place at Mr. Musichead Gallery, 7420 W. Sunset Blvd., in the heart of Hollywood’s “Rockin Row” on Thursday, June 18 from 7 to 10 PM and will be preceded by a VIP reception at 6:30. The New York event is set for Thursday, July 9 at the ARChive of Contemporary Music, 54 White Street in Soho. Jonathan Clarke, whose Out of the Box show is heard on Q104.3 will host the event. Both the Los Angeles and New York launch receptions will provide an onsite opportunity to purchase The Rolling Stones Clear Vinyl + Album Art Lithograph Collections. Both events will feature custom cocktails curated by Pura Vida Tequila.

12 X 5, the Rolling Stones’ second full-length U.S. release, in October 1964, combines tracks from the band’s earlier U.K. EP Five by Five (recorded at Chess Studios in Chicago) with additional material, including the smash hit singles “It’s All Over Now” and “Time Is on My Side.” 12 X 5 is dominated by the Stones’ takes on R&B and the blues, which would shape and inform the hard blues/R&B wing of the British Invasion in ensuing years. This “Clearly Classic” vinyl edition is sourced from the album’s original mono mix. The album’s cover, thought to be a visual riposte to Meet the Beatles, was shot by David Bailey. One of the most celebrated fashion/celebrity photographers of all time, Bailey was appointed a Commander of the Order of the British Empire for his “services to art” and was awarded the Royal Photographic Society’s Centenary Medal and Honorary Fellowship “in recognition of a sustained, significant contribution to the art of photography.”

The thoroughly cohesive and highly regarded Let It Bleed is considered by many to be the Rolling Stones’ best album. Tracks include “Midnight Rambler,” “You Got the Silver” featuring Keith Richards’ first lead vocal, the apocalyptic-themed “Gimme Shelter,” the band’s faithful take on Robert Johnson’s country blues “Love in Vain,” and the epochal “You Can’t Always Get What You Want.” The Let It Bleed album cover art is by Robert Brownjohn, the American-born graphic designer known for creating the title sequences of such films as Goldfinger and From Russia with Love. The Let It Bleed cover features a Dadaist LP-shaped cake created by cookbook author Delia Smith, the design inspired by the album’s original title, “Automatic Changer.” Let It Bleed’s innovative imagery has resonated over the years since its release in late 1969. The cover art was a recent addition to the design collection of New York’s Museum of Modern Art and was the subject of a commemorative postage stamp issued by Great Britain’s Royal Mail in 2010.

‘Get Yer Ya-Ya’s Out!’ The Rolling Stones in Concert holds the distinction of being the first live album by any artist to reach No. 1 on the U.K. charts. Recorded at New York City’s Madison Square Garden on November 27 and 28, 1969, the featured concert was part of the U.S. tour during which the group was introduced for the first time as “the greatest rock and roll band,” as heard at the start of the album. Ya-Ya’s is considered the Stones’ finest live album and includes concert versions of the hits “Jumpin’ Jack Flash,” “Street Fighting Man” and “Sympathy for the Devil,” but is most notable for a nine-plus-minute version of “Midnight Rambler” with extended harmonica solos by Mick Jagger, widely considered the greatest recorded version of the song. Shortly after the album’s release, rock critic Lester Bangs noted in his Rolling Stone review, “It’s still too soon to tell, but I’m beginning to think Ya-Ya’s just might be the best album they ever made. I have no doubt that it’s the best rock concert ever put on record.” The album’s cover was shot by David Bailey in February 1970 and the original design is by John Kosh (art director for over 100 album covers, including The Beatles’ Abbey Road, The Who’s Who’s Next, the Eagles’ Hotel California, and Rod Stewart’s A Night on the Town) and features an atypically exultant Charlie Watts holding two guitars alongside Jack, a donkey burdened with some of his drum kit and a guitar. It has been suggested that Bob Dylan’s song “Visions of Johanna,” which includes the line “jewels and binoculars hang from the head of the mule,” was the inspiration for the Ya Ya’s cover concept.

The Rolling Stones Limited Edition Clear Vinyl + Album Art Lithographs will be available for purchase at 12:01am ET on June 10, 2015 at www.spotlightgallery.com or by calling 1-877-914-3040, where future distinguished entertainment collectibles will also be presented.