December 7th was set to be the day to celebrate the release of the live capture of one of the biggest night’s in Bowling For Soup‘s twenty four years together as a band. Their recording of the biggest ever headline show in the bands’ career, which took place earlier last year at London’s Brixton Academy, has been immortalised in the live album and DVD “Older, Fatter, Still The Greatest Ever – Live From Brixton“. Featuring Bowling For Soup playing their iconic “Drunk Enough To Dance” album in full plus many more hits, it was a show never to be forgotten for all those who were there.

Unfortunately due to technical and logistical issues, the release of the album and DVD had to be delayed until early this year. The new release date for “Older, Fatter, Still The Greatest Ever” will be the 18th of January 2019. Bowling For Soup and their team are very sorry for the delay, as they want to ensure that their fans will get the best quality product possible.

Two of the songs from “Older, Fatter, Still The Greatest Ever” are currently available on Spotify to give everyone a taste of what is to come. “Life After Lisa” and “Greatest Day” can both be streamed on the links below:

A reminder of the full tracklisting for the album and DVD can be found below. “Older, Fatter, Still The Greatest Ever – Live From Brixton” can be pre-ordered at the following location – https://greatestever. bowlingforsoup.com/. 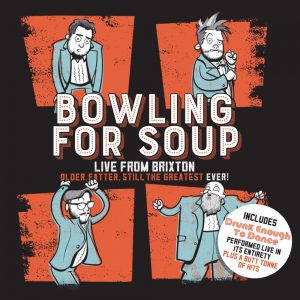 “Older, Fatter, Still The Greatest Ever – Live From Brixton” Tracklisting:

Bowling For Soup were recently announced to return to Reading and Leeds Festivals for the first time in sixteen years. They’ll be lining up alongside headliners The 1975, Twenty One Pilots, Post Malone and Foo Fighters, with Bowling For Soup playing on the same day as The 1975 (exact stage and slot to be confirmed). Here’s what BFS main man Jaret Reddick had to say about their Reading and Leeds return:

“Back to where it all began for us in the U.K. I’ll never forget driving up to that festival and wondering “how the heck I ended up in this place.” The tent was packed. People recognized us watching Slipknot and Blink 182…it was the beginning of an amazing relationship with the U.K. and here we are again. Reading and Leeds!!! I can’t tell you how excited we are to be back! I promise we will make it a weekend not to forget!”

The line up for Reading and Leeds 2019 as it currently standa can be seen on the poster below: 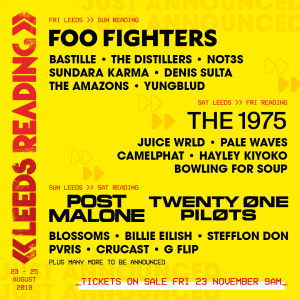