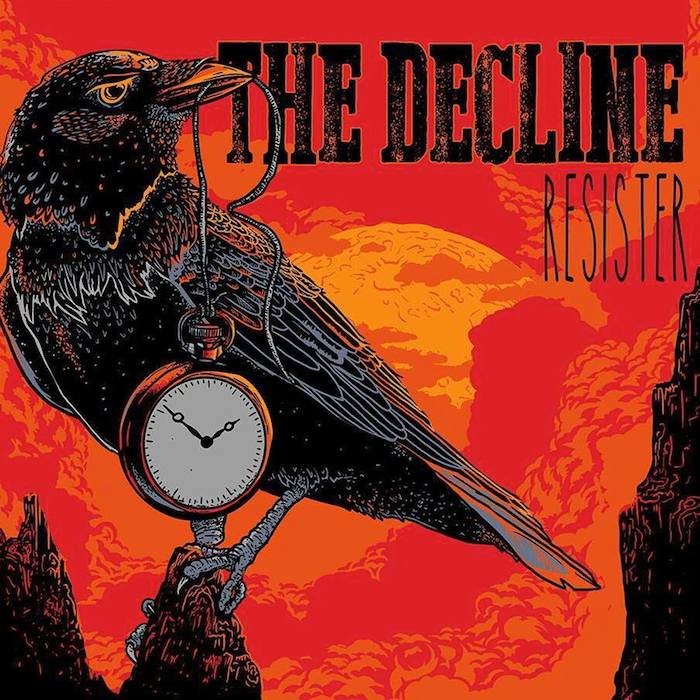 RESISTER interview with THE DECLINE

RYL: Your new album is titled “Resister” which is its main achievement and what it means to you lyrically speaking?

The Decline:  I guess the main achievement of Resister is that we managed to get it written, recorded and released?

I’ve been waiting to do a follow up record to 2011’s Are You Gonna Eat That for a really long time. So just having Resister out is mind blowing to me.

Lyrically speaking, I tried to give Resister a more personal and emotional edge. The idea was to take the speed and melody that we had achieved on our past records and do something meaningful with it.

The Decline: You could say that. On our earlier records our lyrics had a high focus on social justice and having a social conscience.

Resister has more of a personal theme going on. A lot of the songs on the record are about the changes life throws you and how you deal with them.

RYL:  Where do you live? How your city influences your music?

The Decline: We live in Perth, in Western Australia.

The most isolated city in the world, and the only capital city on the Australian West Coast. This isolation means that to an extent, you have a lot of local influences.

There are hundreds of bands in Perth, some of whom you may have heard of. Hardcore bands like Miles Away and Break Even, or rock bands like Gyroscope or Jebediah…

Oh and I think maybe ACDC or at least Bon Scott. To be honest I am not sure if I would call any of those bands an influence on The Decline, however the fact that there was always something going on, and always people to talk to about music or to play with or to share records with has shaped us in a huge way. Cheers Perth!

The Decline: For me, it’s a process of first having an idea for what you want to say or achieve with a song.

Then, I usually get a lyric and a melody for the main hook of the song at the same time, and then I spend a week or so constructing the rest of the song in my head, usually while I am driving or doing something where I have time to think.

Next once I have a verse and chorus and maybe a bit more written I take it to my guitar, but by this stage, I usually have a pretty good idea of how I will play it.

That’s how I do it, our guitarist Ben writes as well but has his own way of doing it!

RYL: Do you remember the day you wrote “Giving Up is a gateway drug”?

The Decline: Giving Up Is a Gateway drug is an interesting one. That all started with the title. I thought it was a great line to describe what I think happens when people give up on music or art or whatever they want to do, and then fade away into mediocrity.

I actually spent months writing different sections for that song in my head and then taking it to the guitar but I could never get it to flow exactly right. I think it still has those elements actually, it stops and starts a lot and inda has a weird structure.

Also I think originally it had entirely different lyrics in both of the verses.

To summarise, it took a while. But I remember once I got the chorus down the rest kinda fell into place.

The Decline: I would have to say the most important thing to me is getting out there and playing, and taking our music to new places. I really believe that if you want something, you have to go out there and make it happen.

Other than that, our socio political stuff like human and animal rights are very important to me, and our DIY ethos.

The Decline: That’s a hard one. We have a few songs that I am particularly proud of, like New Again, I Don’t Believe, A Crash Course in Emotional English and Excuse Me. All of these songs are pretty regular in our live set too, so no surprises haha!

The Decline: I have a new song called I’m Not Alright which I am looking forward to playing with the band once we get home from our UK tour. It’s a song that analyses life in a modern economy from a Marxist perspective and takes into account Marx’s understanding of a false consciousness.

It also, attempts to review this idea and how it fits into our dependence upon technology.

The Decline: A lot of big plans! Just finished up in Europe, travelling in the UK right now and in a month or so we are doing Japan, Mexico and the USA!

The Decline: Broken Bones is about how sometimes people in trouble can isolate themselves and make their problems worse. If this happens with someone you know, it can kind of make you feel like you don’t really know them anymore. I went through something like this a while ago with a friend!