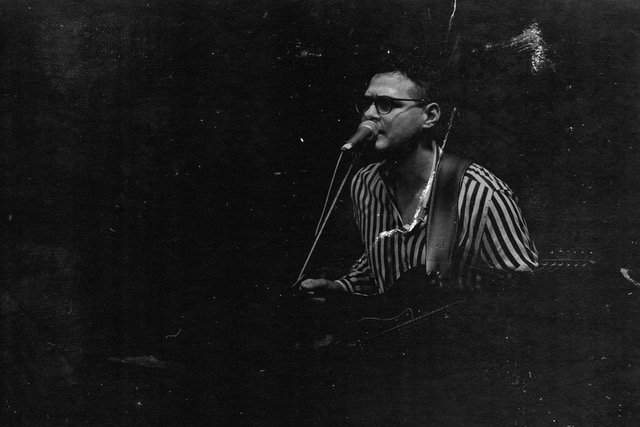 I like to retreat to a quiet, isolated place when I write. Eliminating distractions, both physical and digital, allows me to be present and connect deeply to whatever emotions are moving me in that moment. I usually start with a rough sketch. This initial stage isn’t really about constructing any kind of linear narrative, it’s just about conjuring as much vivid imagery and sensory detail as possible related to the emotions I’m trying to convey. Then I go through multiple rounds of edits to refine those raw materials by trimming the excess, expanding upon interesting ideas, constructing some kind of emotional or literal narrative, and arranging the overall song structure and form. Starting from a free association sketch can throw some interesting twists into the process. Sometimes I think a song is about one thing and over time the heart of the song reveals itself to be something totally different.

Honesty. Every word should be grounded in truth, whether it’s personal, observational, or universal. Otherwise it’s just BS that’s not worth my time to write or my audience’s time to listen.

Absolutely. But I think vulnerability is disarming to a listener and makes them feel safe enough to put their guard down and relate their own experiences to that of the artist.

I think “Rewire” is my most brutally honest song. The verses contain some of the most vivid and evocative imagery I’ve ever written:

A wild beast tethered to another – both running to the opposite ends of the earth, running from each other…

What inspired “Shadows of Old Love,” part of your upcoming album “Rewire”?

“Shadows of Old Love” is about being blinded by rose-tinted memories of a relationship that was once warm and tender, and slowly realizing that it’s grown toxic and cold. Sometimes we stay in unhealthy relationships based on how things were in the past or how we want them to be in the future, not realizing the damage that’s being done in the present.

“Lightning Strikes” is about the fleeting nature of young love. It’s wild and passionate and reckless and naive and, most of the time, not meant to last… and that’s ok. There’s also a subtle undercurrent of foreboding about how our memories become romanticized over time.

Do you remember the day you wrote “Friendship and the Fever?”

Surprisingly yes, considering my memory is notoriously bad. “Friendship…” is the oldest song on “Rewire.” I wrote it the summer before my freshman year of college. I was in the middle of a really bad stretch of insomnia, which I dealt with on and off for a few years. That night, like most nights around that time, I was laying awake in bed staring at the ceiling, exhausted but unable to sleep. I got out of bed, walked downstairs, grabbed my guitar, stumbled upon a chord progression, started mumbling a few lyrics, and in about 15-20 minutes the song was pretty much finished. I recorded a sleepy demo of it and went back to bed. Over the years I’ve edited it a few times and changed the arrangement, but it’s essentially the same as when it was written. It was the first song I wrote that made me think, “Oh shit! That’s my voice as a writer!” It took me like 100 songs to discover it and about 100 more to figure out how to write in that voice all the time.

“Rewire” is about the honest self-examination that occurs, or at least should occur, at the end of a relationship. Trying to figure out who you were, who you are, who you want to be, and how to move forward with your life. That pursuit typically leads us past our recent relationships to the foundational ones that occurred during our formative years. Family, friends, first loves… For better or worse, they shape and inform how we love, communicate, and relate to others. “Rewire” chronicles that journey.

One of the emotional peaks of the album is the end of “Roses and a Romeo Mask.” The music drops out and I plead, “If I could change her mind you know I would!” Then the drums rumble back and the song careens into the Outro, which has this pretty Arcade Fire-inspired gang vocal. As I finished tracking guitar parts for that song, my engineer/producer, Shane Olivo, told me to go into the amp room, turn it up all the way, and noodle with feedback for awhile. So I did. Five minutes. Ten minutes. Twenty minutes. Every so often I’d peak through the glass with the look, “Uh, isn’t that enough?” and Shane would wave dismissively and gesture for me to keep going. I must’ve done it for about an hour. Just making the most obnoxious noises possible. When we finished we immediately moved on to the next track and I kind of forgot about it. A few weeks later Shane sent me the first mix and I was taken aback and actually got pretty emotional. He layered in all of the tracks to create the beautiful wall of feedback that swirls around the end of “Roses…” He took something that was epic but pastoral and added this undercurrent of anxiety and desperation that cuts to the heart of the song. He also took me to this killer pho place for lunch during one of the sessions. That was pretty great too.

Playing some shows to celebrate the release of the new album. Trying to branch out to some new audiences in new cities. Hitting the studio for the next batch of releases. Staying busy.