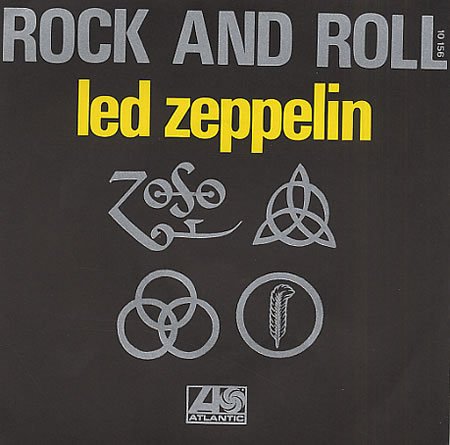 You know that “Rock N Roll” is the most favourite song of all the members of Led Zeppelin?

It has been written by the entire band in 1972 and released as part of the album “Led Zeppelin IV”, the most famous of the band that sold over 40.000.000 copies and that contains, among other songs, “Stairway to Heaven”

are the four symbol of the band members introduced by this album.

Rock n Roll born from a studio jam session that the band was having while their were finishing other songs part of the album.

The name takes origins from the fact that the song takes inspiration by the roots of rock and roll; the drum intro is the base of “Keep a Knockin” of Little Richard,  the riff made by Jimmy Page is inspired by classic blues while the lyrics, created “on the spot” by Robert Plant are inspired by several songs of the late fifties and sixties like “Walking In the Moonlight”,”The Stroll” and”The Book of Love” .

It is a journey that the band did it and, at the same time, a re-discovery of the good old times when rock and roll was in its pure essence.