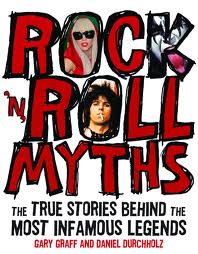 How many times have you heard about rock n roll legends? It is never enough…..do you agree? 🙂

How many times have you spent countless hours with your friends talking about the crazy things that singer or that band did?

The book of today talks about those rock myths; some of them are true (confirmed by the real protagonists), some of them will just remain in the history of rock n roll without proper explanation.

It has been written by Gary Graff and Daniel Durchholz, both co authors of Neil Young, but also journalists, professors and music experts.

Don’t worry, their intent is not the one of destroying the stories that made legendary your favourite artist…….the scope is to give you an extra insight, sometimes funny sometimes just as clarification of the facts.

Our favourite: Ozzy that bites the head off from a bat and then does the same with a white dove during a press conference……… it can’t be compared to anything else! we love him!!!