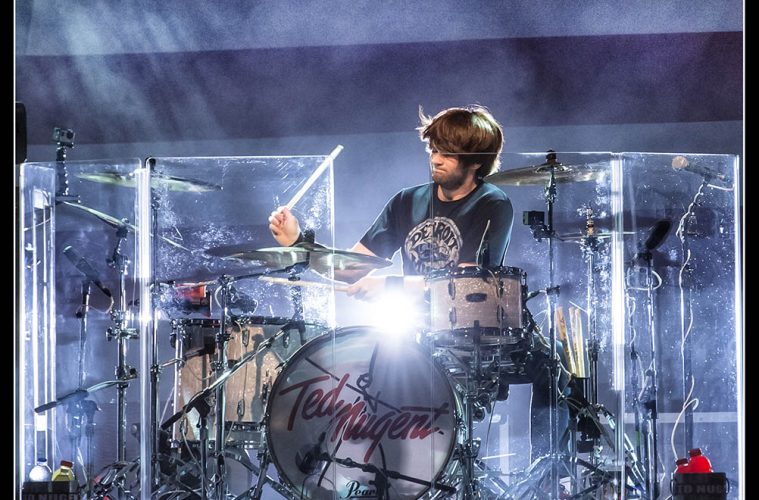 How did your passion for drums started?

I started messing around on my dad’s drums when I was about 6 months old. Once I was about 3 years old, I really began to play the full kit and jamming with musician friends of my dad’s. By the time I was 5 years old, I began to play professionally around Detroit doing cover gigs and really found a love for the instrument. I never realized that this was a job and my career until I was much older and had been touring the country for a few years, because it has always been so much fun to play and never seemed like work.

Who is your biggest inspiration? / Who do you have a lot of respect for?

What single night out has been the most memorable for you?

Every single gig and recording session is memorable!

Are you able to share any of your secret tricks with me?

A great magician never reveals his tricks…….hahahaha just kidding! I really don’t have many other than listen to as much music as possible and pick up different styles to incorporate into your growth as a musician.

What is one mistake you see a lot of up and coming drummers making? / What advice would you give to aspiring drummer?

The biggest mistake I see a lot is musicians not learning and playing enough different styles and genres. There are a lot of stubborn musicians in the industry that will only play the type of music that they only want to play. I also always strongly suggest to be a part of school band and take part in as many ensembles as possible.

If you could eternally be stuck in one year’s music scene, which year would it be?

Hmmm, well picking one year would be tough, but I try to model my career after the session musicians in the 70s and 80s. So would love to have been around during that time.

What is one track that never gets old for you no matter how many times you hear it?

Probably “Baba O’Riley” by The Who or “Rosanna” by Toto.

What is one track that got popular that you can’t stand?

Honestly, I really don’t know….I am a fan of all music.

What is your favorite song, lyrically speaking?

What are your future plans?

I am always on the move touring with various artists or working in the studio. I am also in the middle of getting my bachelor’s degree from Berklee College of Music in Music Business. Once I am done with my bachelor’s, I will move on to getting my Masters.

And last question is a bit unusual, we want to know your best relationship advice.

I have stayed single for a long time because I am always on tour for months at a time and when I am home, I work nonstop on studio work, school work and running Prudential Music Group, which I am a managing partner. So, it is not fair to have a girlfriend at this stage of my life and career, so I stay single for that reason.